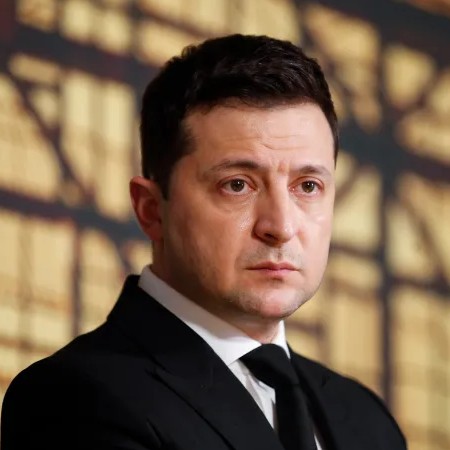 A Ukrainian politician Volodymyr Zelenskyy is also a former actor and comedian, who is the sixth and current president of Ukraine.

What is Volodymyr Zelenskyy’s Age?

Volodymyr Zelenskyy opened his eyes to this beautiful world on January 25, 1978. He was born in Kryvyi Rih, Ukraine. As of now, Volodymyr is 44 years old. According to his full date of birth, Volodymyr’s sun sign is Aquarius. By birth his full name is Volodymyr Oleksandrovych Zelenskyy. He is the son of Rimma Zelenskaya (mother) and Oleksandr Zelensky (father). By profession, Volodymyr’s mother used to work as an engineer.

Likewise, his father is a Ukrainian mining scientist who specializes in the automation of geological and surveying support. He is the only son of his parents. Volodymyr’s paternal grandfather was Semyon Ivanovych Zelenskyy. Similarly, his maternal grandparents are Vladimir Osipov and Olga Solomonovna. By nationality, Volodymyr holds Ukrainian citizenship and follows Jewish as a religion. Similarly, he belongs to Ashkenazi Jewish ethnic background.

Where did Volodymyr Zelenskyy study?

Volodymyr passed the Test of English as a Foreign Language and received an education at the age of 16. He got the opportunity to study in Israel, but his father did not allow him to go. Later Volodymyr got a law degree from the Kryvyi Rih Institute of Economics. Then a department of Kyiv National Economic University. As for now, he is part of Kryvyi Rih National University but did not go on to work in the legal field.

Volodymyr is a happily married man. He has tied the knot with his school sweetheart Olena Kiyashko. The duo met each other in the school where they both studied. After being in a relationship for a very long time they finally said their marriage vows in September 2003.

Their marriage was held in front of some friends and families. As for now, the duo is living a blissful and happy marriage life.

Does Volodymyr Zelenskyy have children?

Yes, Volodymyr and his wife Oleno have given birth to two children. One daughter and one son. The duo’s first child daughter  Aleksandra Zelenskaya was born in July 2004. Similarly, their second child son Kiril Zelenskiy was born in January 2013.

Volodymyr’s daughter Aleksandra in the 2014 movie 8 New Dates, their daughter played Sasha, the daughter of the protagonist. Similarly, she participated in the show called The Comedy Comet Company Comedy’s Kids in 2016 and won 50,000 hryvnias.

What is Volodymyr Zelenskyy’s Net Worth?

In addition, he is very happy with his career at the moment. Volodymyr’s income leads him to live a happy and luxurious life with his family members. Within a short period of time, he became successful in making his name as well as fame in the public.

The Russian military began to take over the border of Ukraine in the spring of 2021. The former president Zelenskyy accused both Russia and Ukrainian oligarch Rinat Akhmetov of planning to overthrow his government, and made a call for preemptive action.

Vladimir Putin ruler of Russia on the morning of February 24, 2022, announced that Russia was officially beginning a military operation in the Donbas area of Ukraine. So he launched missiles at Ukrainian military targets, causing Zelenskyy to declare martial law. Rather than evacuating, he chose to be in the capital in allegiance with his country’s defense forces.

What type of government is in Ukraine?

What is Volodymyr Zelenskyy’s height?

Volodymyr stands at a height of 5 feet 9 inches. According to his height, he has a body weight of around 63kg. Similarly, he has an attractive pair of brown eyes and short black hair.

What language does Volodymyr Zelenskyy speak?

Volodymyr’s first language was Russian. Likewise, he is also fluent in Ukrainian and English.

What is the nationality of Volodymyr Zelenskyy?

Which ethnic background does Volodymyr Zelenskyy belong to?

What is Volodymyr Zelenskyy’s Net Worth?

Volodymyr has an estimated net worth of around $1.5 million as of 2022.

What is Volodymyr Zelenskyy’s height?

Volodymyr stands at a height of 5 feet 9 inches tall.