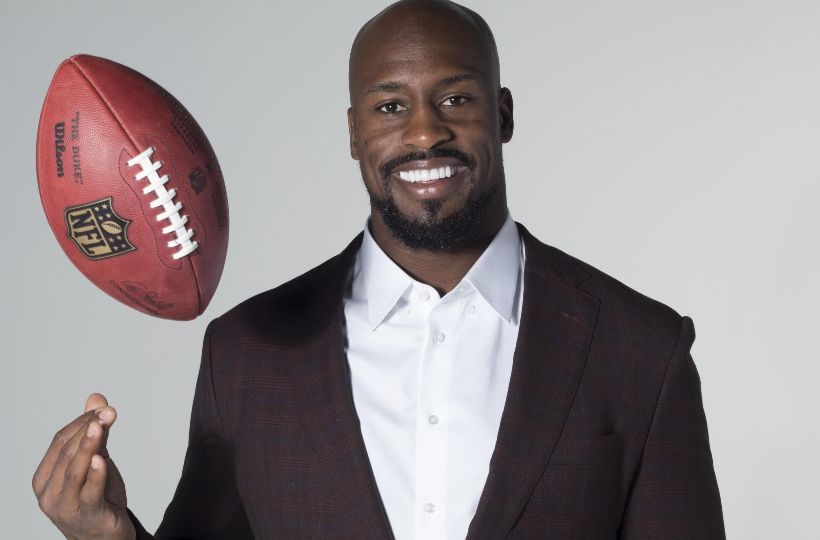 Former American football player, Vernon Davis is famous for earning the two career Pro Bowl selections. The San Francisco 49ers drafted him at sixth overall in the NFL Draft of 2006.

Today, in this article, we are going to talk more about his personal life including his wife, girlfriend, kids, parents, and other many interesting facts.

Vernon Davis has not married yet but he is engaged to his long-term partner, Kayla Sortor. The couple met for the first time at a bar in Washington D.C in the year 2016. It is still unclear when the couple officially started their relationship but it is known that Davis went on one knee to propose to Kayla in the year 2018. During their engagement, he hired a plane and four skydivers to ask for Kayla’s hand in marriage.

It has been more than three years since the couple has engaged but they are yet to share the wedding vows. Currently, they are enjoying their engagement and are planning to get married soon. Their relationship is also going smoothly that there is no rumor regarding their breakup or separation to date.

Does Vernon Davis have a Wife?

As we have already mentioned, Vernon is not married so he does not have a wife. However, it is known that his partner, Kayla Sortor is a talented lady who is currently working in security for the US Federal Government. She opened her eyes on 26th December 1991, in Maryland, the United States of America. She received a Bachelor of Arts in Communications in 2014 at the University of Maryland College Park.

Kayla received the degree of Master of Arts in Organizational Communications in the year 2017 at Bowie State University. She is currently serving as a Strategic Communications Specialist for Centauri.

Past Relationships of Vernon Davis

Vernon was previously in a relationship with Janel Horne. They even got engaged but their relationship could not last long so they parted ways after 15 years of togetherness.

How many Kids does Vernon Davis have?

Vernon has three kids with his ex-girlfriend, Janel. Among his three kids, two of them are Jianni Davis and Valleigh Davis while the third one’s name is still missing from the media.

Vernon has a special bond with his kids and he loves all of them equally. The entire Davis family lives a happy and peaceful life together.

Who are Vernon Davis’s Parents?

Vernon’s parents are Duke Davis (father) and Jacqueline Davis (mother). His father was a drug addict that’s why Vernon had to face a lot of difficulties in his childhood days. Vernon has altogether six siblings. Among them, his brothers are Vontae Davis and Michael Davis while others’ identities are still missing from the media.

His brother, Vontae is also a football player. His parents divorced when Vernon was too young so his grandmother, Adeline Davis took care of him and all of his other siblings.

Where did Vernon Davis go to college?

Vernon finished his schooling at Paul Public Charter School. After that, he studied at Dunbar High School in Washington, D.C., United States. Vernon received a degree in Arts Studio at the University of Maryland in College Park, Maryland.