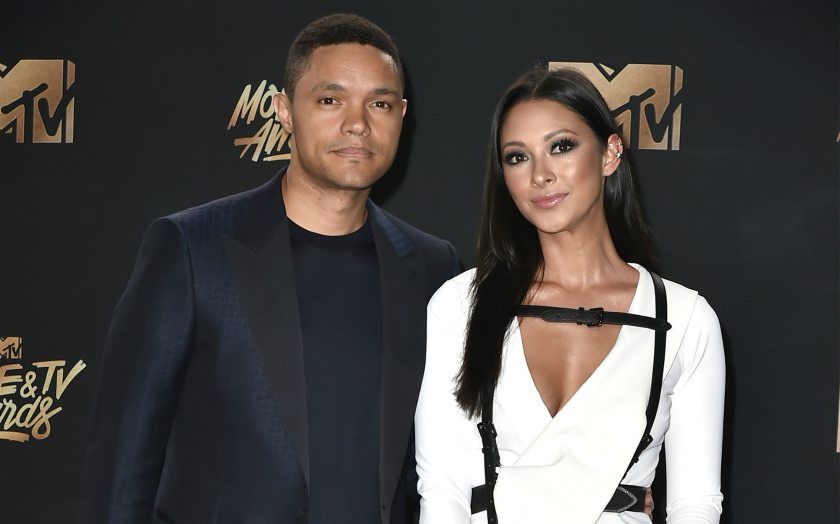 Who Is Trevor Noah Dating in 2019? Is he Just Dating or Married?

Trevor Noah is the host of The Daily Show on Comedy Central who has blown up in popularity since taking over the show from Jon Stewart. Also, he has surprised many by making Time’s 100 most influential people in the world in 2018. Not bad considering Trevor is only 35 years old and relatively new to the country and stardom.

The South African native left his country, family, and girlfriend behind to start his career. Now Trevor is one of the top comedians and well-respected in show business. No one can resist the charm and humor of Trevor and while all of us are crushing over him, he is happily dating longtime girlfriend Jordyn Taylor. How is their relationship going on now? Who is his ex-girlfriend? We have all the details below:

Who is Trevor Noah Dating? Is he Married?

Trevor is not married but he is dating Jordyn Taylor since the year 2015. The couple first met at one of Noah’s comedy gigs in New York, no doubt Taylor was instantly attracted to his humor and charm. His girlfriend, Jordyn is a famous model and former singer. Trevor and Jordyn are together almost at every event and their fans are so happy to see them like that.

They also frequently appear on each other’s Instagram posts. Jordyn is very supportive of Noah’s professional career. When Noah published his memoir, Born a Crime: Stories from a South African Childhood in the year 2016, she posted a heartfelt Instagram post showing how proud she was for her man. Currently, they are sharing an apartment on Manhattan’s Upper West Side and there are rumors of their breakup.

Past Relationship with Dani Gabriel

Trevor Noah was previously in a relationship with Dani Gabriel. They had already known one another for five years before things began in January 2014. They were so close to each other that rumors about their engagement also swirled in the media. She frequently toured with Noah around the world for his comedy sets, however, it was because of his busy schedule they parted ways.

It was the time when Dani couldn’t leave her physiotherapy practice in South Africa and Trevor remained busy in his comedy tour in Cape Town. A source close to Noah said that,

“Dani is an ex-girlfriend. They decided to go their separate ways and are not together anymore, they split a few months ago but are still friends.”

On the other and Dani is a private person. She refused to talk about her split to the media.

“I don’t need to show my support publicly for Trevor, it doesn’t need validating to anybody else besides me and him. Anything that needs to be said I’ve said to him personally. There’s really nothing more than I need to say, whatever’s there is there, beyond that, it is genuinely between me and him.”

Though Trevor and Dani are no longer dating, one thing about her still grabs the attention of media. Unbelievably, Dani and Taylor; Trevor’s present girlfriend share a striking similarity. Besides their similar interest in music, acting, and fitness, they are so much similar to a look-alike.

Trevor Noah is the son of Robert Noah (father) and Patricia Nombuyiselo (mother). His father is of Swiss-German descent while his mother is Xhosa from South Africa. His mother, Patricia was jailed and fined by the South African government when she gave birth to him. Interracial sexual relations and marriages were not legalized until the amended Immorality Act of 1985 in South Africa.

Later, his mother was married to Ngisaveni Abel Shingange in the year 1992. They had two sons together named Andrew and Isaac. Trevor and his mother, Patricia were both physically abused by Shingange, and the couple legally divorced in 1996. In the year 2009, she married Sfiso Khoza but Shingange shot her in the leg and through the back of the head.

Though Patricia survived as the bullet went through the base of her head, avoiding the spinal cord. In the year 2011, Shingange(Noah’s father) was convicted of attempted murder and sentenced the following year to three years of correctional supervision. Trevor said that his mother seeks to police many times for justice but it was a norm in South Africa and the case never went to court.