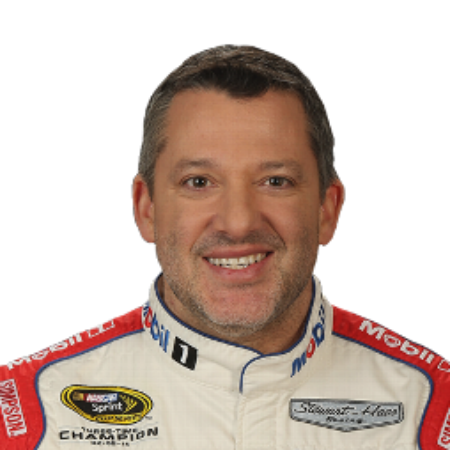 He grew up along with his younger sister named Natalie Stewart. Tony’s parents divorced when he was in high school. According to the sources, his father Nelson is still single but his mother remarried after that.

His nationality is American whereas his ethnicity is North American. He attended the Columbus North High School. While he was in school he was famous for playing the Trombone in the famous Columbus North Marching Band.

Is Tony Stewart Married or in a Relationship?

Well, talking about his personal life, Tony is still single. But, he had been in many relationships before. Initially, he was dating Krista Dwyer during the early days of his career. But, they had to call it quits when Tony’s career demanded his presence at different places for his races.

After two of his unsuccessful relationship, Tony met Penelope Jimenez. The two lovebirds met in mid-2016 before Tony’s retirement from NASCAR later that year. Penelope got on with her modeling career when she appeared in the cheerleader TV commercials for the XFL football league at Huntington Beach. She was a famous model and an actress as well.

Jimenez and Tony Stewart finally got engaged on Thanksgiving day in 2017 with their engagement received so much approval and best wishes from fans of both celebrities alike. This time, Tony and Jimenez look more serious about their relations.

What is Tony Stewart’s Net Worth and Salary?

Tony is among one of the best-paid car racing drivers of his time. According to the sources he is said to have accumulated a whopping net worth of $90 million throughout his career as a car racer. His annual income was $19 million and for the championships, he received a significant amount in millions of dollars. In the 2005 season championship, he won a total of $13,578,166 including $6,173, 633 considered the highest season total in the history of NASCAR.  Likewise, it is also worthy to note that the first race he won in the non-championship NASCAR Sprint All-Star Race XXV earned him over $1 million.

Apart from his profession as a car racer, Tony Stewart is also involved in several endorsements that pay him over $6 million. Further, he has endorsement deals with brands like Coca-cola, Toyota, Oakley, Burger King Steak House XT, and many more. Along with this, he also has a good number of business interests and he is said to have bought the All-Star Circuit of Champions club, Eldora Speedway, and part own Macon Speedway and Paducah International Raceway.

To talk about his properties, Tony is the owner of several luxurious houses in Indiana and he owns sleek cars like; 1984 Cadillac, 1957 Chevy Belair, 1955 Chevy Nomad, 1967 Pontiac GTO, and 1979 Pontiac Trans Am Firebird which is said to be his favorite one.

How tall is Tony Stewart?

Regarding his body measurements, Tony stands at the height of 5 feet 9 inches whereas he weighs around 81 kg. Moreover, Tony has got a dark brown pair of eyes and dark brown hair.

During the race, Kevin Ward’s car collided with the wall forcing him out of the race in 2013. When he struggled to get out of his car, Stewart’s car hit him, leaving him dead. The case was filed against him for Kevin’s death. But, after investigations including hearing from multiple witnesses, the court found no reason to hold Stewart responsible for Ward’s death. Though he was not guilty, Ward’s parents filed a wrongful death lawsuit against Stewart.