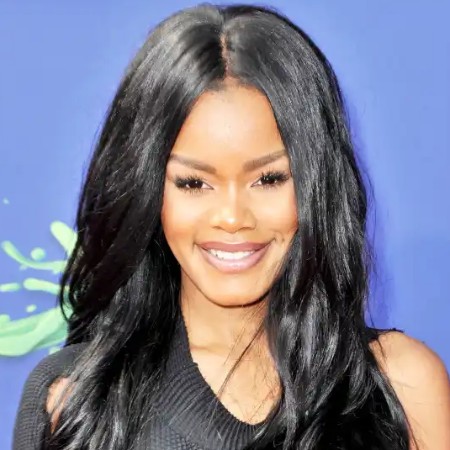 Teyana Taylor is a singer-songwriter-actress-choreographer-director-model. She is famous as the wife of an American professional basketball player Iman Shumpert.

How old is Teyana Taylor?

Teyana Taylor opened her eyes to this beautiful world on December 10, 1990. She was born in Harlem, New York, United States. As of 2022, she is 31 years old. Her sun sign is Saggitarius according to her date of birth. Teyana celebrates her birthday on the 1oth of Dec every year. Her mother’s name is Nikki Taylor and her father’s name is Tito Smith.

She is her mother’s only daughter while she has three step-siblings from her father’s side. Teyana holds American citizenship and belongs to African and Trinidadian descent. Likewise, she follows Christianity as a religion.

Teyana is in a conjugal relationship with Iman Shumpert. By profession, her husband Iman is an American professional basketball player. The couple first met in 2014, when they were both going through a breakup. The couple announced their pregnancy in September 2015 and proposed at their baby shower the following fall.

Teyana revealed on The Wendy Williams Show on September 20, 2016, that the duo had secretly married. However, the statement was later proven to be false. The two actually tied the wedding knot on October 1, 2016, which was just two weeks after Teyana’s appearance on the show.

Past Relationships of Teyana Taylor

Teyana was previously in a relationship with Brandon Jennings. By profession, he is a basketball player. The duo was engaged but their relationship didn’t last long.

She was also dating Soulja Boy Tell’Em in the past. By profession, he is a Rapper. The duo separated in 2009. She has also seen DeSean Jackson a football player.

Does Teyana Taylor have children?

Teyana is the mother of two children. She and her husband have given birth to two adorable daughters. Their names are Iman Tayla Shumpert Jr. (born in 2015) and Rue Rose Shumpert (born in 2020).

How much is Teyana Taylor’s Net Worth?

Similarly, Teyana’s husband Iman Shumpert has an estimated net worth of around $30 million as of 2022. He collected that hefty sum of money from his career as an American professional basketball player. His annual salary is around $11 million.

Where do Teyana Taylor and Iman Shumpert live?

Teyana and Iman live in Atlanta, GA. The duo has bought a stylish house which is a luxe house on the outside. Their house is 2D designed which has eye-popping decor and a custom dining room. Likewise, the duo is selling their Studio City, CA house for $4 million. The house has a 5-bed, 6-bath, obligatory pool, movie theater, and even a waterfall.

No Tenaya and Dionne aren’t actually related to each other. But by profession, both of them are singers while Dionne is an actress also.

No Teyana and Chris Brown are not related to each other by blood or anything. Tenay says they are just siblings. By profession, Chris is an American singer, songwriter, dancer, and actor.

Is Teyana Taylor a brand ambassador?

Teyana is the CÎROC Peach vodka brand ambassador. Her nail salon is Junie Bee Nails which she named after her daughter.

Why was Iman Shumpert arrested?

Iman Shumpert, a former NBA player, was taken in custody at Dallas-Fort Worth International Airport. He was in custody after security screeners found a sizable bag of marijuana and a gun magazine in his backpack.

How tall is Teyana Taylor?

Tenaya stands at the height of 5 feet 7 inches. while he has a body weight of around 55 kg. Similarly, she has an alluring pair of brown eyes and beautiful curly black hair.

Does Teyana Taylor have tattoos?

Yes, Tenaya has 11 tattoos on her body. Some of them are tribal designs on her hip. GOOD music logo on her arm. diamond, writing on her bicep.

Tenaya is keeping her body fit by doing the dance. She said:

“I have a dance fitness program called Fade2Fit, where we do live videos of us dancing,” “We combine dancing and exercise to make it fun and release pressure.”