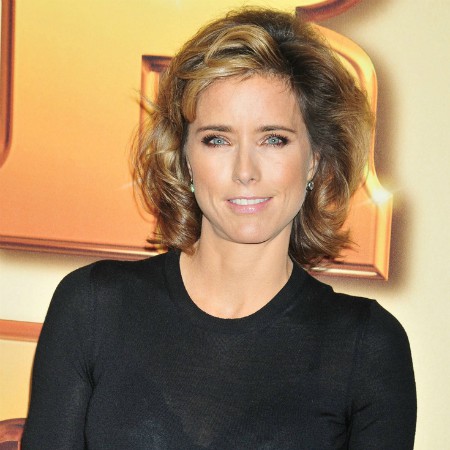 Tea Leoni is an American actress who came to the media spotlight after she starred in the movie, Bad Boys.

When was Tea Leoni Birthed?

Tea Leoni was born Elizabeth Tea Pantaleoni on 25th February 1966 in New York City, the United States of America. As of 2022, she is 56 years old and her horoscope is Pisces. Her father’s name is Anthony Pantaleoni while her mother’s name is Emily Patterson. Her father was a corporate lawyer with the firm Fulbright & Jaworski while her mother was a nutritionist. She grew up with her brother, Thomas Pantaleoni.

She attended two private schools namely, Brearley School and The Putney School. After that, she attended Sarah Lawrence College but did not complete her studies.

Who is Tea Leoni’s Husband?

Tea Leoni was previously married to her husband, Neil Joseph Tardio on 8th June 1991 at St. Luke’s Episcopal Church in Hope, New Jersey. After four years of marital relationship, they divorced in the year 1995. The reason for their divorce is still not available at the moment. Later, Tea married an actor, David Duchovny on 13th May 1997. They gave birth to a daughter, Madelaine West Duchovny, and a son, Kyd Miller Duchovny.

Later, they separated for several months but reconciled and were seen often together as a family. In the year 2014, they divorced. Currently, Tea is dating Tim Daly. They often make public appearances together with Leoni’s kids. As the couple is dating, neither Leoni nor her boyfriend Tim has mentioned the plans of getting engaged or married.

What is Tea Leoni’s Net Worth and Salary?

Tea Leoni earns a massive amount of money in her career.

Tea has an estimated net worth of around $20 million her salary is not available at the moment. Currently, she lives a lavish and luxurious life with her children. She bought a house on Upper West Side at 190 Riverside Drive for around $5.1 million in the year 2013.

Tea Leoni stands at a height of 5 feet 8 inches and her body weight is around 55kg. In addition, she has an attractive body with measurements of 34-26-34 inches which includes bust, waist, and hip size respectively. Tea’s hair color is dyed blonde while her eye color is blue in color.

Leoni has been featured in movies like Switch, Bad Boys, Jurassic Park III, Ghost Town, House of D, People I Know, Tower Heist, The Family Man, and other many more. Also, she was featured in TV series including Flying Blind, The X-Files, Madam Secretary, Frasier, and so on.

Her outstanding performance earned her wide recognition as well as the nomination for several prestigious awards. Tea won Saturn Award for Best Actress in the year 200 for the movie, The Family Man. Also, she was nominated for Blockbuster Entertainment Awards, TV Land Awards, People’s Choice Awards, and so on.

Which ethnic background does Tea Leoni belong to?

Yes, Tea Leoni is dating Her Madam Secretary Co-Star Tim Daly. They have been dating since the summer. Leoni and Daly were first seen together in July at a performance of the play Red in Vermont.

What is the height f Tea Leoni?

Tea Leoni stands at the height of 5 feet 8 inches tall.