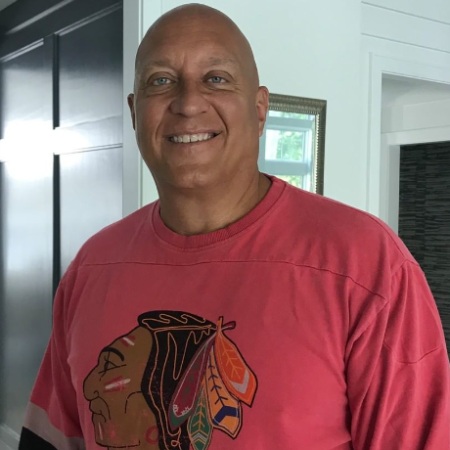 Where is Steve Wilkos from?

Steve opened his eyes to this beautiful world on March 9, 1964. He was born in Chicago, Illinois, United States. His full name is Steven John Wilkos. As of 2022, he is 58 years old and his birth sign is Pisces. He is the son of Stanley Wilkos (father) and Jeanette Wilkos (mother). His father is a former Police Officer by profession while his mother is a beauty school instructor by profession.

He has a brother and two sisters. Steve is the third child among four children. His grandparents’ names are Orville James Pelikan, Joseph Koehler, and Anna. He holds an American citizen and belongs to mixed (Polish, Hungarian, Czech, and German) ethnic descent. Moreover, he follows the Christianity religion. In 1982, Steve Wilkos completed his diploma from Lane Technical High school.

Yes, Steve is living a happy conjugal life with Rachelle Consiglio. Rachelle is a former senior producer on Jerry Springer and also an executive producer of The Steve Wilkos Show. They married in 2000. They have been married for 22 years. Rachelle is his third wife.

For the first time, Steve and Rachelle met on The Jerry Springer Show. She was a producer of the show while he was a part of the cast as security. He said to the magazine:

“I got to know her as a person; who she was as a woman, and as a producer from working together. I fell in love with her; I was in love with her even before we started dating,”

Who did Steve Wilkos previously marry?

Before marrying Rachelle, he was in a relationship with Rosae Wilkos and Hannah Wilkos. Steve married his first wife Rosae in 1985. They stayed together for two years and separated in 1987.

After the separation from Rosae, Steve got married to Hannah in 1990 but their relationship ended in the same year. Steve and Hannah got separated because he fell in love with Rachelle.

Does Steve Wilkos have a child?

Yes, Steve is the father of two adorable children. The name of his children is Ruby Wilkos, and Jack Wilkos. Ruby the eldest kid of Steve was born in 2003while his second child Jack was born in 2005.

What is Steve Wilkos’s Net Worth?

Where does Steve Wilkos live?

Recently, Steve and his family live in a Darien Home in Fairfield County, Connecticut. He bought this home in June 2009. He paid $1.8 million for a two-story house. His house is made up of 5362 square feet. Darien’s home consists of five bedrooms and five full bathrooms.

Before starting his own reality show, he worked as the director of security on The Jerry Springer Show. Steve worked on the tabloid Jerry Springer show for almost 13 years.

Did Steve Wilkos have an accident?

On January 21, 2018, Wilkos was charged with drunk driving after a rollover accident close to his house. He has asked the judge for an alternative sentence that would result in the charges being dropped after a course of counseling and instruction.

What happened to The Steve Wilkos Show?

A new season of Steve’s show has started. The popular talk show has been renewed for a 16th season in national syndication, according to NBC Universal Syndication Studios’ announcement.

Was Steve Wilkos a Marine?

How tall is Steve Wilkos?

Steve stands 6 feet 2 inches tall and his weight is 85kg. Furthermore, he is bald and has an alluring pair of blue eyes.