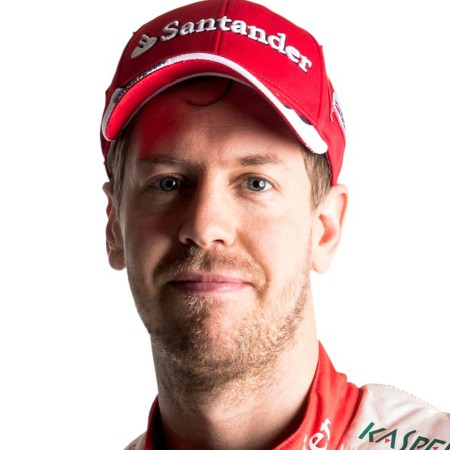 Sebastian Vettel is an international professional German racing driving player. He became a four-time Formula One World Champion and has won in 2010, 2011, 2012, and 2013 championships with Red Bull Racing.

Sebastian Vettel was born on July 3, 1987, in Heppenheim, Germany, to Norbert and Heike Vettel. As of 2019, he is 31 years old with the birth sign Cancer. He has two older sisters Melanie and Stefanie, and a younger brother, Fabian, who is also a racing driver. Melaine is a dental technician whereas Stefanie is a physiotherapist for disabled children.
He holds German nationality and belongs to a white German ethnic background. He passed his school-leaving exams from Starkenburg Gymnasium with a respectable grade. His childhood heroes were Michael Schumacher, Michael Jackson, and Michael Jordan.

In 2008, Sebastian Vettel received Rookie of the Year at the annual Autosport Awards. He got awards like the Lorenzo Bandini Trophy for his achievements in 2008 and was also voted German Sports Personality of the Year. He won the International Racing Driver category at the Autosport Awards for four successive years from 2010-13 along with the highest sports award in Germany, the Silberne Lorbeerblatt–Silver Laurel Leaf, for his multiple world titles in 2012.
Then he voted as F1 driver of the year in 2009 and 2013. He won DHL Fastest Lap Award in 2009, 2012, and 2013. Therefore he got the European Sportsperson of the Year by ‘Pap’ in 2012 and 2013 but in 2014, he was able to get Sportsman of the year at the Laureus World Sports Award.

How much is the Net Worth and Salary of Sebastian Vettel?

Vettel is the highest-paid Formula 1 driver in the 2018 F1 season with a record 3 year deal with Ferrari worth $42 million annually. Reportedly, he is said to have a net worth of $55 million. One of the highest-paid sportspersons of 2017, he was on the 18 places in Forbes list of top 100 paid athletes in the world. His three-year contract with Ferrari earned him around $50 million in the first year, while $30 million a year plus bonuses afterward with maximum bonuses of around $10 million.

Sebastian Vettel has a huge collection of luxury and exotic cars. He owns many of the best luxury cars available in the world. The Cars owned by Sebastian Vettel include Lotus, Aston Martin, Ferrari, Mercedes AMG, and Alfa Romeo. Vettel also has $500,000 worth in endorsements.

Vettel endorses brands like Casio, Tirendo, Infiniti & Pepe Jeans. He resides in a medieval-style farmhouse in Switzerland worth around $5 million. His car collection includes VW people carrier and Infiniti Vettel FX, manufactured by Nissan (which is worth $154,390). He also owns a private helicopter.

Who is Sebastian Vettel Married to?

Sebastian Vettel is in a romantic relationship with school girlfriend Hanna Prater but has not married yet. The duo is a classmate in Heppenheim Middle School. After graduating, the two started a long-distance relationship when Vettel moved to Switzerland for his racing career. In the year 2010, the couple decided to take their relationship to the next level. The couple started living together in Switzerland.

After living together for 4 years, the couple shared their daughter Emilie born on January 12, 2014. Similarly, they shared a second child, daughter Mathilda, born in September of 2015. As of 2019, they have confirmed that they are not married as they do not feel the need for it just yet.

His girlfriend takes care of their children and helps her boyfriend/ husband in managing his career obligations. She is a very private person, doesn’t like to seek attention like many other celebrity wives and girlfriends. The couple is living a blissful life together with their daughter. As of 2019, they live in Switzerland.

Sebastian has an appealing body figure. He stands at a height of 5 feet 9 inches with a bodyweight of 68 kg. Similarly, he has blonde hair color with hazel eyes color with white skin tone.