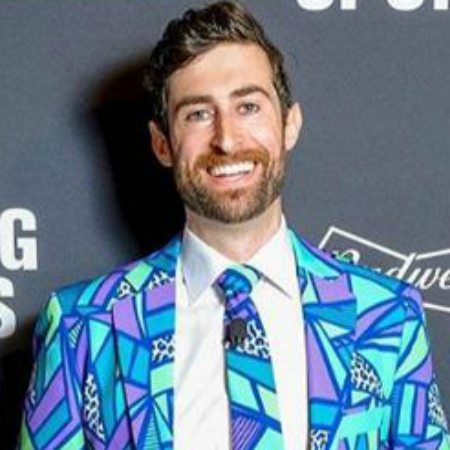 Scott Rogowsky is an American comedian as well as a TV host who has contributed to various TV shows such as NFL Writers Room, Onion SportsDome, and The Onion News Network.

Scott Rogowsky entered this world on 4th December 1984, New York City, New York, the United States of America. As of 2020, his age is 36 years old while his horoscope is Sagittarius. His father’s name is Marty Rogowsky. His parents had his upbringing in Harrison, New York.

Scott holds an American nationality and belongs to a Jewish ethnical background. He completed his education in political science as an undergrad at Johns Hopkins University, Baltimore, Maryland. He discovered his comedic talents while attending the Univesity.

What is Scott Rogowsky Net Worth and Salary?

Scott Rogowsky has earned a decent amount of money as a comedian and TV host while his net worth is around $1.5 million as of 2022. As per some online resources, a comedian in the United States earns an average annual salary of $30k.

No, Scott Rogowsky is not married to the date, in fact, he is possibly living a single life. There is no information regarding both past and present love life. In an interview, he stated:

“Truthfully, I’m far too busy to be a good boyfriend right now. But if someone’s looking for a completely unavailable, sleep-deprived stress ball living with his parents in Westchester, I’M YOUR GUY!”

How tall is Scott Rogowsky?

Scott Rogowsky stands at a height of 6 feet 1 inch tall. He has an athletic build. Scott has both dark brown colored hair and eyes.

In the year 2011, he hosted the sports and comedy talk show called 12 Angry Mascots. Since the year 2011, he has been hosting his own show Running Late with Scott Rogowsky. The show is held at various venues around New York City and Los Angeles and it consists of guests like comedians, musicians, authors, and actors. In the year 2017, Scott also hosted a pop-up talk show Start [email protected] for one season.

Scott reached his height in entertainment with the role of HQ trivia’s host in 2017. It is an app created by tech entrepreneur Rus Yusupov. Also, it is a very popular app where players can participate at no cost and can split prize money if they can answer correctly a series of questions of increasing difficulty. However, his journey with HQ trivia came to an end in March 2019. Many of his fans that he was fired, but the truth of the matter is he decided to leave on good terms.

As of now, he is hosting a weeknight Major League Baseball show, DAZN in late March 2019. DAZN is a sports-streaming service headed by executive chairman John Skipper who is the former head of ESPN.