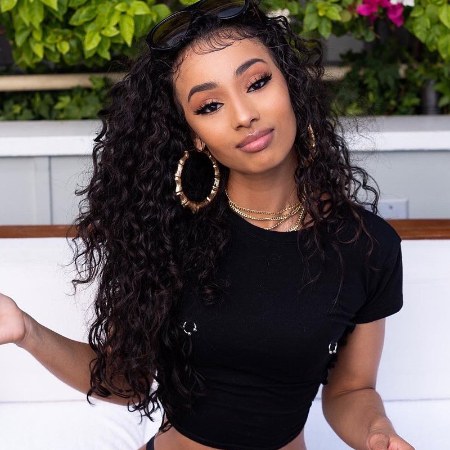 Rubi Rose is an American rapper who came to the spotlight as the main model for the hip-hop group Migos and the hit music video Bad and Boujee (2017).

Where is Rubi Rose from?

Rubi Rose opened her eyes to this beautiful world on October 2, 1997. She was born in Lexington, Kentucky, United States. As of 2022, Ruby is 25 years old while, her horoscope is Libra. She celebrates her birthday on the 2nd of October every year. Her full name is Rubi Rose Benton. Her father’s name is John Benton and her mother’s name is Nardos Ghebrelul. Rubi’s father is a professional lawyer whereas, her mother is an Eritrean immigrant dentist.

Rubi’s elder sister’s name is Scarlette Benton and her younger sister’s name is Coral Benton. She holds American citizenship while she is of mixed ethnic descent as she was born to an Eritrean immigrant mother and a black American-Japanese father. Moreover, she follows the Christianity religion.

Where did Rubi Rose go to college?

Is Rubi Rose single or in a Relationship?

No, Rubi is currently single. Similarly, she is not dating anyone at the moment. For now, she is focusing on her music career.

During some of her interviews, she mentioned that she wanted a guy who is taller than her. Rubi has also shared a post about her future man’s height, saying:

“My next n-gga gotta be tall, I wanna wear heels.”

Who did Rubi Rose previously date?

In the year 2015, Rubi started dating a rapper named Playboi Carti. They broke up because Rubi claimed that she became the victim of domestic violence but also Carti was arrested red-handed at LAX following a physical altercation with Rubi. She also dated DDG. The couple began dating in September 2018 but their relationship came to an end. After that, she was in a relationship with rapper 21 savage. Her name is also linked with Travis Scott. Rubi also dated a football player Cam Newton in 2017.

Likewise, she was also in a relationship with a rapper, Lil Yatchy from June 2016 to February 2017. Rubi was linked with another rapper Lil Tjay. Tjay ended up with her allegedly getting stranded after the flyout. Rubi met an American rapper Takeoff in August 2016. Rubi was in a relationship with producer Jacob York in 2015. They were together for one year and separated in 2016. Moreover, Rubi dated a model, Ian Connor. Rubi filed a case on the rape allegations against him.

How many people has Rubi Rose slept with?

DDG tweeted about her, claiming she had slept with 60 different people. This wasn’t true as DDG instantly apologizes to Rubi Rose after admitting that he had lied about her having “60 bodies.”

Are Rubi Rose and Ruby Rose the same person?

No, Rubi is an American rapper whereas Ruby is an Australian actress. Rubi belongs to a mixed(Eritrean-Japanese) ethnicity while Ruby belongs to white ethnic background.

How much is Rubi Rose’s Net Worth?

Rubi Rose’s net worth is approximately $350k. According to some resources, an average salary of an American rapper is range from $18,720 to $141,440. Also, she must be earning the same amount from her career.

Where does Rubi Rose live now?

Currently, Rubi lives in Los Angles, California, United State. Los Angeles is a large city and also, the center of the nation’s film and television industry.

How many languages can Rubi Rose speak?

Rubi can speak 4 languages. She can speak three languages fluently except one language. She speaks English, French, Tigrinya, and Spanish.

Does Rubi Rose have plastic surgery?

No, she never had plastic surgery. Speaking out against body shamers, she tweeted,

“I’ve never touched my body, no shots/bbl/filler/veneers nothing,”

What is Rubi Rose’s Height?

Rubi stands 5 feet 4 inches tall and she has a body weight of 54 kg. Likewise, she has a body measurement of 36-24-40 inches. Rubi wears a 32-bra size D cup and her shoe size is 5 (US). She has an alluring pair of black eyes and black hair.

Which ethnic background does Rubi Rose belong to?

Where did Rubi Rose go to college?

How many languages can Rubi Rose speak?

Rubi can speak 4 languages. She can speak three languages fluently except one language. She speaks English, French, Tigrinya, and Spanish.

Does Rubi Rose have plastic surgery?

No, Rubi never had plastic surgery.