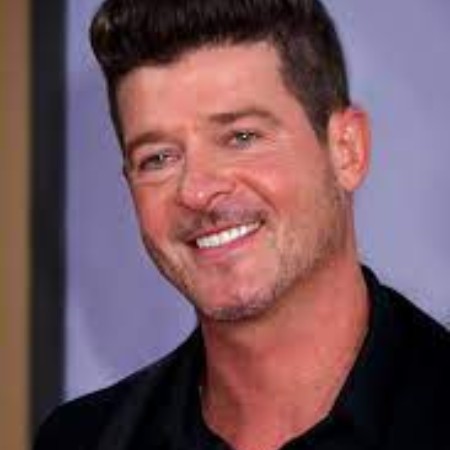 American singer, songwriter, and record producer Robin Thicke rose to popularity after he released his single Blurred Lines in the year 2013. He has reached the position of number one on the US Billboard Hot 100.

Who is Robin Thicke’s Dad?

Robin Thicke came into this beautiful world on March 10, 1977, in Los Angeles, California in the United States of America. This makes him 45 years old as of now. Robin celebrates his birthday every 10 March. He falls under the star sign of Pisces. His full name is Robin Alan Thicke. The name of his father is Alan Thicke and the name of his mother is Gloria Loring.

Where did Robin Thicke go to School?

Robin ah completed his schooling at the Montclair College Prep School. He graduated from there before he started his music career.

Is Robin Thicke in a Relationship?

Who is the Ex-Wife of Robin Thicke?

Robin has been married once in his lifetime. The name of his ex-wife is Paula Patton. The pair have started dating each other at the very early age of 16. They tied their marriage knot on June 11 of the year 2005 after dating each other for a very long period of time.

They share one son with each other. As childhood lovers, they were not able to keep their marriage stable for a lifetime. After staying in the marriage relationship for a decade, the duo finalized their divorce on March 20 of the year 2015.

Did Robin Thicke cheat on his wife?

In the year 2013, there was a big rumor that Robin has cheated on his wife with the model Lana Scolaro. His Instagram photo with Lan has gone viral that year in which Robin put his hand on the butt of the model Lana.

How many children does Robin Thicke have?

Robin is the father of four beautiful children. He was blessed with one son with his ex-wife Paula. The name of his eldest son is Julian Fuego Thicke. Julian was born in the year 2010. After his divorce from his ex-wife, he welcomed three other children with her former girlfriend April.

What is Robin Thicke’s Net Worth?

As of 2022, Robin’s estimated net worth is $10 million approximately. From his successful career as an American singer, producer, songwriter, and actor he has gained a hefty sum of money for himself. He has worked with many popular artists in Hollywood and he has gained much popularity as well as lots of money.

Thicke has afforded himself a very luxurious life. In the coming future as well he will gain many names and fame from his artistic career. He is still struggling in his career and he will earn even more worth in the future after reading more songs under his own name.

Where does Robin Thicke live?

Currently, Robin is living in Los Angeles, California, U.S. Robin’s house in Malibu, California for $2.39 has been destroyed in the California wildfires. He lost his house in November 2018. He used to stay in that house with his partner along with their children. Robin’s wife has shared the photo of the smokes and wrote:

“Our house is somewhere in there. I’m so sad but so thankful that we all made it out safe. Praying for everyone in Malibu, our home is up in flames.”

Robin and Alan Thicke are related as father-son. Alan left Robin and his mother when Robin was seven years old. Later Alan died in the year 2016. After the death of Alan, Robin paid tribute to Alan by posting an Instagram post on the fourth anniversary of his death.

How tall is Robin Thicke?

Robin stands at a height of 6 feet 2 inches tall. Similarly, he has a body weight of 88 kg. He has hair of black color and blue color eyes. The body measurement of Robin is 44 inches chest, 15.5 inches biceps, and 36 inches waist.

There was a criticism that Robin has copied Marvin Gaye’s song Got to Give It Up by collaborating with Pharrell Williams. By the federal appeals court, a $5.3 million judgment was sustained against Robin and Pharrell. After that, they gave $7.3 million as part of the ruling to the family of Marvin.

How did Robin Thicke destroy his career?

Because of Similar songs of Robin’s and William’s songs Blurred Lines and Got to Give It Up, They the losing end of a lawsuit with the estate of Marvin Gaye. This somehow destroyed his career.

Robin left the edition of The Masked Singer’s US edition in the protest. He walked off after the revealment of Rudy Giuliani as the contestant. Not only does Robin has that reaction, many people are having the same reaction.

Was Robin Thicke a one-hit wonder?

No, Robin is not a one-hit wonder. Robin has proved that by admitting that he did not winter the controversial single song Blurred Lines.

What is the nationality of Robin Thicke?

Where did Robin Thicke go to study?

Robin ah completed his schooling at the Montclair College Prep School. He graduated from there before he started his music career.

Robin and Alan Thicke are related as father-son. Alan left Robin and his mother when Robin was seven years old.

Robin left the edition of The Masked Singer’s US edition in the protest. He walked off after the revealment of Rudy Giuliani as the contestant. Not only does Robin has that reaction, many people are having the same reaction.