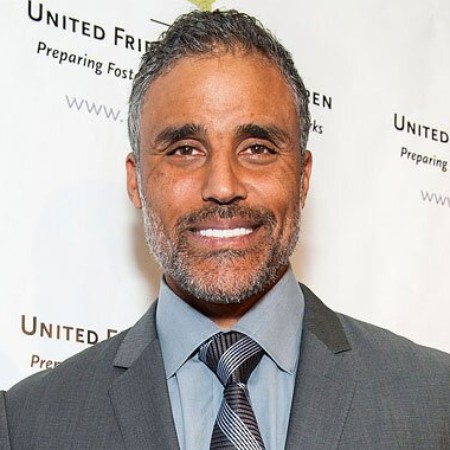 Canadian-Bahamian former basketball player, Rick Fox has become an actor and businessman after his retirement.

What is Rick Fox’s nationality?

Rick Fox opened his eyes on 24th July 1969, in Toronto, Canada to Canadian parents. As of 2021, Rick is 52 years old while his horoscope is Leo. His birth name is Ulrich Alexander Fox. He was born to Ulrich Fox (father) and Dianne Gerace (mother). His mother, Dianne a retired Canadian track athlete while his father is an entrepreneur. His mother was a native of Canada while his father was a native of the Bahamas.

When he was too young, his parents moved to the Bahamas and settled there. He grew up with his two sisters, Jeanene Fox and Sarah Fox. His sister, Jeanene is an actress. Rich holds dual nationality, Canadian-Bahamian while he belongs to mixed ethnical backgrounds.

Rick finished his schooling at Kingsway Academy in Nassau. After that, he attended the Warsaw Community High School in Warsaw, Indiana where he became a member of the high school’s basketball team. He finished his graduation at the University of North Carolina at Chapel Hill in Chapel Hill, North Carolina.

How much is Rick Fox’s Net Worth & Salary?

Rick Fox has an estimated net worth of around $20 million as of 2022.  He has been able to garner this amount earned through his professional career as an actor and former professional basketball player. During his acting days in his NBA career, he earned around $34 million as his salary throughout his career. He is earning really well and doing a great job so his net worth will surely rise higher in the future days.

Apart from his professional career, Rick earns some amount through endorsements, advertisements, and sponsorships of various fashion brands and companies. He lives a lavish and fulfilling lifestyle with his family members from the earnings he made through his career.

No, Rick is not married to an actress, Eliza Dushku. They had a brief relationship for five years from 2009 to 2014 but they never shared the wedding vows. Rick was previously married to an actress, Vanessa Williams in the year 1999 but their marriage did not last long as it ended through a divorce in 2005. He also dated Kari Hillsman in the year 1994.

As of now, Rick is living a single life and he is more focused on his career rather than being with anyone else. He has never been a part of any kind of rumors or controversies that might include his personal or professional career.

Does Rick Fox have a son?

His son, Kyle is an American Video game developer, Streamer, and Community manager while his daughter, Sasha is a film actress and producer.

How much does Rick Fox Weigh?

Rick stands at a height of 6 feet 7 inches tall while he weighs around 102kg. He has not mentioned his chest size, biceps size, shoe size, waist size, etc with the media. Rick has white-black hair while his eyes are dark brown in color.

Yes, Rick left the TV series, Morning Show mysteries in the year 2021. He appeared as Ian Jackson from 2018 to 2021. During his departure for the series, he stated the following statement on his Twitter account.

“Scheduling challenges – the show had a window to shoot due to COVID that conflicted on my end – I do wish it would have worked out. Holly and the producers have built something special, wishing them all the best.”