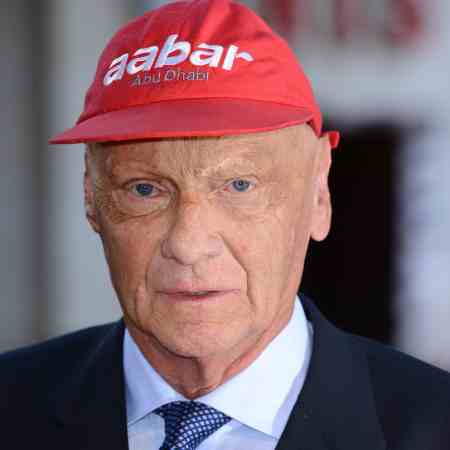 Niki Lauda was an Austrian former Formula One driver. He had won three times for F1 World’s Driver Champion in 1975, 1977, as well as 1984. Similarly, he was also known as Andreas Nikolaus Lauda, The Rat.

Niki Lauda was born in Vienna, Austria on February 22, 1949, to parents Emst Peter Lauda and Elisabeth Lauda. His birth sign was Pisces. He belonged of Austrian nationality, and his ethnicity was European.

Was Alesha Dixon Married? Who was His Wife?

Lauda was married twice in his lifetime. Previously, he married Marlene Knaus 1976 who is a model. The couple has two sons namely Mathias and Lukas. Besides this, he has a son Christoph Lauda out of an extra-marital affair. The marriage did not go well so they decided to get divorced in 1991.

Again, he married Birgit Wetzinger 2008, who was a flight attendant. The couple welcomed twins in 2009, a boy named Max and a girl named, Mia.

When Niki was ill and needed to have a new kidney transplant due to the failure of the kidney he received in 1997 from his brother, lovingly, his wife Birgit gave up one of hers to save him. On the 2nd of August 2018, in his native Austria, he successfully underwent a lung transplant operation.

Once there was a rumor that Nico Rosberg might be contemplating a switch to Ferrari for 2017.

How much was Niki Lauda Net Worth?

He used to receive around $2 million per year. His net worth was $200 million at the time of his death in 2019. Moreover, he made $43 million from his brand endorsement F1 and won F1 World  Champion.

What did Niki Lauda Die off?

Niki has often suffered health problems over the past twenty years. In Sept. 2018, he fell ill when he was on vacation in Ibiza and was immediately taken to the hospital back in Vienna. Unfortunately, at the age of 70, during his diagnosis of kidney problems, Niki was found dead at the University Hospital of Zurich.