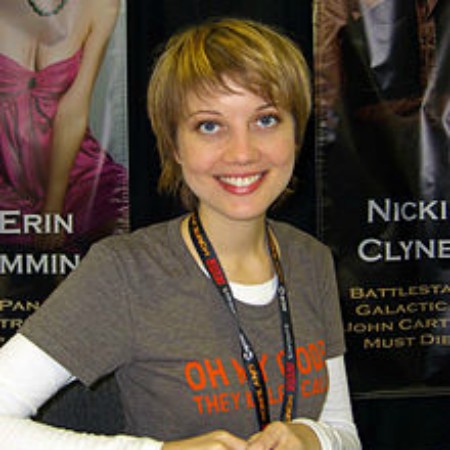 Nicki Clyne is a Canadian actress who often makes the headline for sex trafficking charges. Besides this, she is famous for her role on the Sci-Fi Channel television series Battlestar Galactica as Cally Henderson Tyrol.

Nicki Clyne was born on 1983, 11th of February in Vancouver. Currently, she is 36 years old. Nicki holds Canadian citizenship and belongs to a white ethnic background.

She went to Hugh Boyd Secondary School in Richmond, British Columbia. After that, Nicki enrolled at the University of British Columbia and Simon Fraser University and graduated from there. Nicki stands at a height of 5 feet 6 inches.

How much is Nicki Clyne Net Worth and Salary?

Talking about NXIVM, it is an Albany-based multi-level marketing company. Moreover, Clyne was associated with the company since 2006. Her involvement in NXIVM helped Nicki earn more. The credit for Nicki’s assets and net worth goes to NXIVM and her acting career. Now, despite the sex assaults, the actress is leading a luxurious and lavish lifestyle.

Nicki Clyne had her first screen debut in the second episode of NBC’s comedy-drama series ‘Just Deal’ in 2000. After that, she appeared in an episode of UPN’s short-lived science fiction series ‘Level 9’. Then, her first TV movie was the 2001 drama-thriller ‘Hostage Negotiator’, in which she portrayed a character named Alicia.

Likewise, in a season two episode of the classic science fiction series ‘Dark Angel’, she played an X6 transgenic named Fixit. Her next project was the telefilm ‘The Wedding Dress’. In 2002, she guest-starred in The WB’s (later The CW) superhero series ‘Smallville’.

In ‘Due East’, a telefilm directed by Helen Shaver and adapted from Valerie Sayers’ 1987 novel of the same name, she shared screen space with Robert Forster, Kate Capshaw, and Clara Bryant. She also worked with Robert Townsend, Josh Zuckerman, and Stuart Margolin in the telefilm ‘I Was a Teenage Faust’.
After that, Clyne made her debut appearance as Cally Henderson in the 2003 miniseries ‘Battlestar Galactica’. The shows won four Emmy Awards, one Hugo Award, and one Peabody Award.
Clyne was also cast as Barb in the 2004 comedy-drama ‘Ill-Fated’. After that, in 2006, she portrayed a minor role in the romantic comedy ‘John Tucker Must Die. Then, she essayed the role of Billie in writer-director Neal Brennan’s telefilm ‘Totally Awesome’. Likewise, since 2018, she has been portraying Gail Gartner in the science web series ‘Personal Space’.

Is Nicki Clyne Lesbian? Is she Married?

Talking about her sexual orientation, she is a lesbian. The famous actress always keeps her dating life private. Nicki is hesitant about publicizing her relationship status

Initially, the stunning Canadian actress is married to Allison Christin Mack in February 2017. After that, Nicki and Allision worked together in NXIVM’s operations in Vancouver.

In the beginning, the pair were close friends but eventually, they started living together in the same house in Raniere. Then, Clyne began working for Clare Bronfman at a low wage of $15 per hour.

However, the relationship between this pair seems platonic and a common way for the foreign nationals’ cult members to get around immigration rules. Moreover, it is also rumored that the sex cult leader Allison exchanged vows with Nicki to defraud US immigration.

Before this, she was having trouble fulfilling her visa obligations. Besides this, Nicki was also one of the women chasing cops after the cult leader Raniere was busted for sex trafficking.