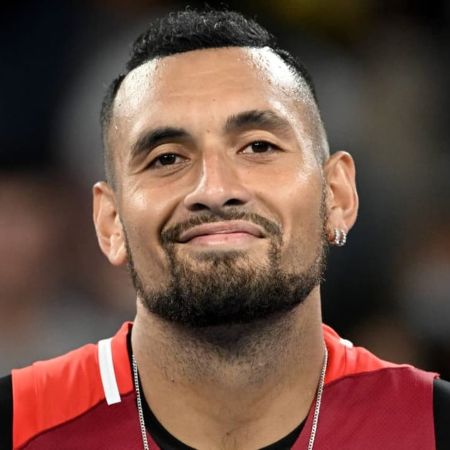 Where is Nick Kyrgios from?

Nick Kyrgios opened his eyes to this world on April 27, 1995. He was born in Canberra, Australia. As of 2022, he is 27 years old and his birth sign is Taurus. By birth, his full name is Nicholas Hilmy Kyrgios. Similarly, he celebrates his birthday on the 27th of April. Nick’s father’s name is Giorgos Kyrgios and his mother’s name is Norlaila Kyrgios.

His father is a self-employed house painter by profession while his mother is a computer engineer by profession. Nick grew up with his two other siblings. He has one sister and one brother. His sister’s name is Halimah Kyrgios and his brother’s name is Christos Kyrgios.

Similarly, he holds Australian Citizenship while he belongs to a mixed (Greek-Malay) ethnic background. Likewise, he follows Christianity as a religion.

Which college did Nick Kyrgios go to?

Nick completed his grade 8 from Radford College. Then after, he switched to Daramalan College in Canberra in the year 2012.

Is Nick Kyrgios single or dating someone?

Yes, Nick is in a romantic relationship with Costeen Hatzi. His girlfriend is a blogger and the creator of the minimalist home decor company Casa Amor Interiors by profession. Nick and Costeen made the announcement of their relationship on December 30, 2021, when the couple was spotted out and about in Sydney.

The couple started dating over Instagram direct messages (DMs) when he asked about purchasing a mirror from her small business. When Costeen was asked how they two meet in her Instagram story, she posted her answer in the Instagram story

Also, she added they fell head over heels in love. After winning his fourth-round against Brandon Nakashima at Wimbledon ’22, Nick said

“I’ve got the best girlfriend in the world. I’ve just got so many people around me, they just support me,”

Who did Nick Kyrgios previously date?

Before Nick was in a relationship with Ajla Tomljanovic. Nick’s ex-girlfriend is a Croatian-Australian professional tennis player by profession. Nick and Ajla started dating in 2015. In 2015 and 2016, they were frequently seen together and even teamed up for a mixed doubles match at the Australian Open. Once, Kyrgios said to reporters that

“It’s when I’m with her that I am the happiest.”

The couple broke up in 2017 after Nick was found partying with other girls at an event. Also, Nick Kyrgios dated tennis player Anna Kalinskaya. The couple was spotted together at a basketball game at the Staples Center in Los Angeles. But after just two months of dating, they broke up.

How much is Nick Kyrgios’s Net Worth?

Who are Nick Kyrgios’s Sponsors?

Nick is sponsored by well-known brands such as Nike, IMG, Yonex, Beats, and Global Sporting Connections. He is also a founding member of the PlayersVoice website.

Where is Nick Kyrgios’s House?

Recently, Nick purchased a lavish penthouse in Sydney, Australia. He bought that penthouse paying $1.6 million. The penthouse is divided into two floors and has three bedrooms and two bathrooms and also has a plush integrated gloss kitchen, as well as a stunning modern interior with timber accents. Nick’s house consists of a pool outside where they can swim laps, as well as a gym. He lives there along with his girlfriend.

Nick has a collection of cars. Recently, he bought Dominic Toretto (Vin Diesel). Dominic Toretto cost $300,000. Also, he has  Dodge Challenger SRT Demon. It is one of the most expensive and rare cars in the world and its heart is a 6.2-liter supercharged V8 HEMI capable of 626kW/1044Nm (840hp). Likewise, Nick has a green Tesla which was bought for $96985.

Nick Kyrgios and Stefanos Tsitsipas used to be good friends. During the match, tennis fans were captivated by both players’ antics during the third-round match, which saw the Australian maverick defeat the classic Greek in a fractious encounter. Nick Kyrgios defeats Stefanos Tsitsipas in a thrilling match at Wimbledon. Tsitsipas unanticipated a way of playing and understanding his sports points in press conferences and he said

“He is a bully. It is what it does. He abuses the opponents of him. He sure was a bully at school”

How tall is Nick Kyrgios?

Nick stands 6 feet 4 inches tall while his body weight is 85 kg. Likewise, his body measurement is 38-31-35 inches. He wears 11.5 US shoe size. Moreover, he has an alluring pair of dark brown eyes and his hair color is black.