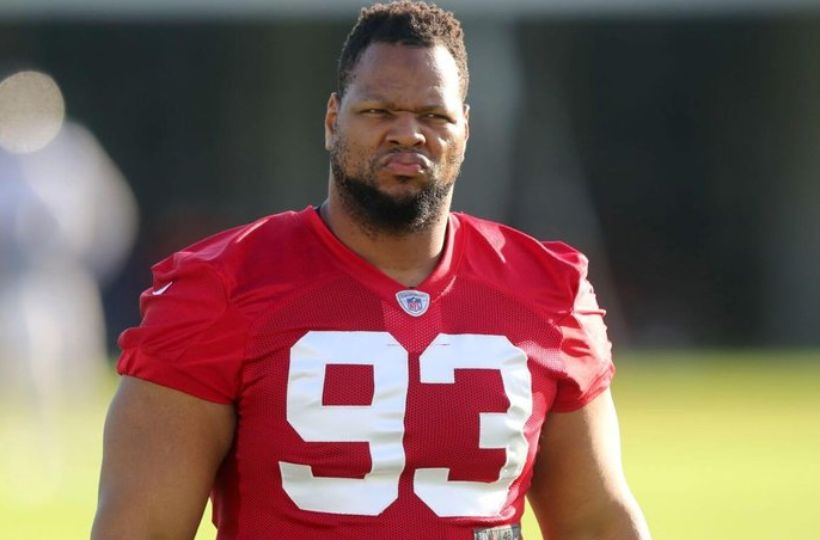 American football player, Ndamukong Suh is currently playing for the Tampa Bay Buccaneers of NFL as their defensive end. Previously, he played college football at Nebraska and he was drafted by the Detroit Lions’ second overall in the year 2010.

His professional life is only known to his followers, so in this article, we’ll talk more about his personal life which includes his wife, kids, parents, and other many interesting facts.

Yes, Ndamukong Suh is a married man. He tied the wedding knot to his long-term girlfriend, Katya Leick. The couple first met each other while they enrolled at the University of Nebraska in 2009 and apparantely, started to date. After several years of their dating, they finally shared the wedding vows on 23rd May 2020 at a private wedding ceremony in front of close friends and family.

Since that day, they have been inseparable as there is not even a single rumor or controversy on their divorce or extramarital affairs to date. It seems like Katya is Ndamukong’s first love because there is no information on his past dating history.

Who is Ndamukong Suh’s Wife?

Later, Katya pursued her career as a morning news anchor at KSNT TV where she worked for two years. She worked as a sales and event coordinator at 5 Church Atlanta. Currently, she is working as a CEO at a company named Kalon Media and a realtor for Keller Williams Realty & Compass.

Does Ndamukong Suh have kids?

Ndamukong has twins sons with his wife, Katya. His sons are Kingston Rudolph Bongjo Suh and Khari David FombuhSuh but he is yet to disclose their birthdate with the media.

Ndamukong has a special bond with both of his sons and he loves them to the dearest. The entire Suh family lives a happy and peaceful life together.

Where are Ndamukong Suh’s parents from?

Ndamukong grew up with his four sisters but he is yet to share his sister’s identies with the media. It is known that one of his sisters is Odette Lennon Ngum Suh who is serving as a midfielder on the Cameroon women’s countrywide soccer team. He has a cousin, Kameron Chatman.

What did Ndamukong Suh study in college?

Ndamukong finished his high school education at Grant High School in Portland. After that, he attended the University of Nebraska where he studied construction management. During the time of the college award functions, he said:

I’ve always been interested in engineering and I chose to study construction management at UNL because of the hands-on learning,”