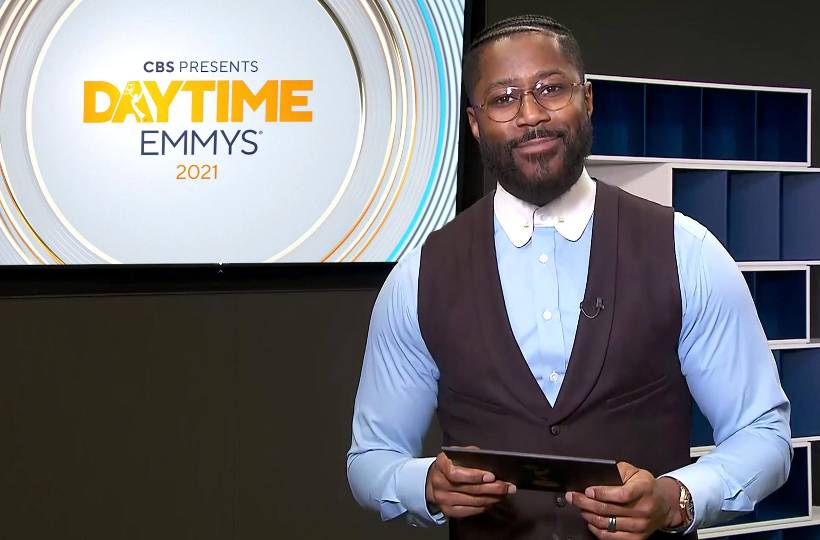 He has been able to make a successful broadcasting career, today we’ll find out whether his personal life is as successful as his professional life or not.

Who did Nate Burleson marry?

Nate Burleson is a happily married man. He tied the wedding knot to his lovely wife, Atoya Burleson. They first met each other in college at the University of Nevada and eventually started to date. After several years of dating, they finally shared the wedding vows in March 2003 at a private wedding ceremony and declared themself as husband and wife.

It has been 18 years old since the couple has tied the wedding knot and their married life is still going smoothly without any kind of obstacles. The couple seems like each other’s first love as there is no information on their past relationships and love affairs. Also, the couple has not been involved in any rumors regarding their divorce or extra-marital affairs.

Who is Nate Burleson’s Wife?

Nate’s wife, Atoya Burleson is an American TV Host. She entered this world on 31st May 1978, somewhere in the United States of America. She is currently serving as the CEO/Host of inSIDELINES which is a podcast hosted by NFL wives.

Previously, she participated in hurdle races as an athlete at the University of Nevada. Atoya often makes her public appearances with her husband on several public events and shows. Also, she is a supportive wife no matter what she will be always there for her husband.

How many Children does Nate Burleson have?

Nate is a proud father of three children, two sons, and a daughter. His sons, Nathaniel Burleson II and Nehemiah Burleson were born in 2004 and 2006 respectively while his daughter, Mia Pearl Burleson was born in the year 2010.

Nate’s son Nathaniel is a junior football player while his other son, Nehemiah is a junior basketball player. His daughter, Mia is a theatre actress. Nate has a special bond with his children. The entire Burleson lives a happy and peaceful life together in the United States.

Both of them were influenced by their father so put his jersey number on the Seattle Seahawks as 81, which was his father’s high school number.

No, Nate is not leaving the daily morning show, Good Morning football. He is currently working there with his co-workers, Kay Adams, Kyle Brandt, and Peter Schrager. He explained this through his twitter’s post saying:

Who are Nate Burleson’s parents?

Nate was born to Al Burleson (father) while his mother’s identity is still unavailable. His father was a football player who played defensive back for the Calgary Stampeders of the CFL.

Where did Nate Burleson attend college?