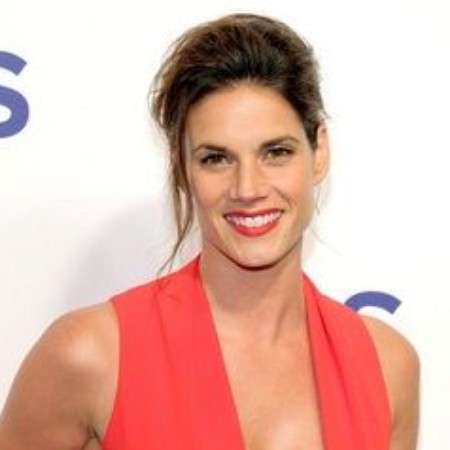 Canadian actress Missy Peregrym rose to prominence for her roles as Haley Graham in the 2006 film Stick It and Officer Andy McNally on ABC.

Who are Missy Peregrym’s Family?

Missy Peregrym opened her eyes to this beautiful world on June 16, 1982. She was born in Montreal, Canada. As of 2022, she is 40 years old. Missy’s full name is Melissa “Missy” Peregrym. Her sun sign is Gemini. She celebrates her birthday on 16th June every year. Her parent’s name is Rev. Darrell Peregrym (father) and Vanessa Peregrym (mother).

Her mother is a housewife and her father is a Pentecostal minister. She has two siblings. Likewise, Missy’s paternal grandparents’ names are Steve Peregrym and Joan Ashton. Missy holds Canadian citizenship and belongs to Rusyn, English, Scottish, and French-Canadian​​ ethnic backgrounds. Similarly, she follows christianity as a religion.

Where did Missy Peregrym study?

Missy attended Fleetwood Park Secondary School in Surrey, British Columbia. Likewise, she got her degree at Aurora College in the Northwest Territories, Canada.

Is Missy Peregrym Married or in a relationship?

Missy is in a conjugal relationship with Australian actor Tom Oakley. The duo was in a long relationship before tying the knot. They said their marriage vows on December 30, 2018, in Los Angeles. Their marriage was held in front of their friends and families.

Does Missy Peregrym have children?

Missy is the mother of two children. She and her husband have given birth to a son and a daughter. Their name is Otis Paradis Oakley, born on March 21, 2020, and Mela Joséphine Oakley, born on June 6, 2022.

Is Missy Peregrym on maternity leave?

Yes, Missy is still on maternity leave as she gave birth to her second child a few months ago. But she will return to her FBI set very soon.

Missy was previously married to American actor Zachary Levi. The duo tied the knot in June 2014. However, their relationship didn’t last long. Missy filed for divorce in Los Angeles, and the paperwork made it appear that their divorce would be amicable. The duo separated on December 3, 2014.

Other Relationships of Missy Peregrym

Missy was in a romantic relationship with Ben Roethlisberger from 2007 to February 2008. She was then seen with Brendan Countee from 2005 to 2006.

Is Missy Peregrym bisexual or is it just a rumor?

No, Missy is not bisexual it is just a rumor created by unwanted people. She proved the rumors wrong by marrying her ex-husband Zachary Levi Pugh.

How much is Missy Peregrym’s Net Worth?

As a Canadian actress and former fashion model, Missy earns an estimated net worth of around $3 million as of 2022. Aside from her acting career she also earns an extra sum of money from ads, sponsorship, and brand endorsement. An average salary of a Canadian actress is $43,875 per year or $22.50 per hour. She might be earning the same amount.

Where does Missy Peregrym live?

Missy lived in Montreal, Toronto, Los Angeles, and Surrey alongside her family. the has her house in all four places.

Why did Missy Peregrym live FBI?

Missy left the FBI to go on maternity leave. In the series FBI, she was playing the character Maggie. She made her last Season 4 appearance before taking leave.

Missy left Rookie Blue because she didn’t want to do a procedural again. She said:

“I took some time off after Rookie Blue, and I had no intention of doing a procedural again, because Rookie Blue is still really special to me,”

How tall is Missy Peregrym?

Is Missy Peregrym actually a gymnast?

No Missy is not actually a gymnast. But she got the chance to play the role of a gymnast in the movie Stick It. Due to the role she played she now kind of feels a kinship toward another gymnast.