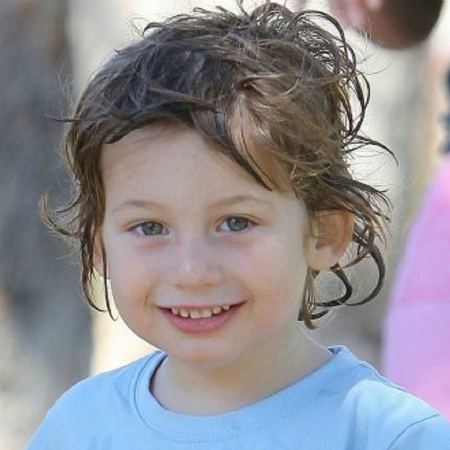 Max Liron Bratman is a cute little prince who was born with a silver spoon. Max gained huge popularity from his celebrity mother, Christina Aguilera who is a famous American singer as well as an actress.

He is the son of Christina Aguilera (Mother) and Jordan Bratman (Father). Christina is a pop singer and an actress and Jordan is a music marketing executive.

His grandparents are Fausto Xavier Aguilera & Shelly Loraine via his mother and Gail Bratman and Jack Bratman via his father. Besides that, he has a younger half-sister, Summer Rain Rutler. He is American and belongs to the white ethnicity.

Well, Max is very small to be in a relationship with anyone. Let’s discuss his parents’ relationship.

His father Jordan Bratman and mother Christina Aguilera met for the first time at a recording studio in 2002. Later on, they got engaged in February 2005 and tied the knots on November 19, 2005, in a Napa Valley estate.

Moreover, they even welcomed their baby, Max Liron Bratman in January 2008. However, after two years, they confirmed their separation in October 2010. In addition, their divorce was finalized on April 15, 2011.

After her divorce, Christina dated Matthew Rutler in November 2010. In February 2014, Matthew proposed to her and she accepted the proposal they engaged on Valentine’s day 2014. The couple is also blessed with a daughter, Summer Rain Rutler. In the present scenario, they are still together and enjoying their blissful life.

Prior to her marriage with Jordan, she dated Enrique Iglesias in September 1998. Their relationship started during a stage performance together in New York City. Even they were seen lip-locking after that and also during many instances.

Nevertheless, their bonding didn’t work. Then she dated Jorge Santos for around 2 years until September 2002. Earlier, she had had encounters with Dallas Austin (2000) and Fred Durst (1999).

Besides that, Christina had a short-lived affair with TV host and radio personality, Carson Daly, in 2002. Then, she dated musician Dave Grohl, of Foo Fighters fame, in March 2002.

Since Max is still a child, it is not his appropriate age to do something on his own. But as he is a celebrity kid, he is enjoying the huge net worth of his parents. Besides that, his first pictures were sold to ‘People magazine for $1.5 million and were the fifth most expensive celebrity baby photos ever sold.

According to the sources, the estimated net worth of his mother, Christina Aguilera is around $160 million as of 2022. Similarly, her present salary is around $15 million per annum.

Looking at the net worth of his parents, it is obvious that he is spending his life like a prince in a palace. Being a rich celebrity kid, it is common to have such an amazing lifestyle. As his parents are still working very passionately in their own field, it is sure that they will add more to their net worth in the coming days.

Moreover, he already had his first photoshoot wrapped in an American flag with his mother Christina for a ‘Rock the Vote PSA in Los Angeles. Similarly, he made his first TV appearance in 2012 in the series ‘Dateline NBC.’ Then, he appeared in the video of Christina’s song ‘Let There Be Love’ in 2013.

His mother Christina’s Songs and Awards

On the other hand, his mother Christina was only 14 when she recorded her first song ‘All I Wanna Do, a duet sung by a Japanese singer. In 1998, Aguilera auditioned for the soundtrack of the animated movie ‘Mulan’.

Furthermore, she won Favorite Female Artist of the Year, Favorite Artist Latino, and Favorite New Female Artist at the Blockbuster Entertainment Awards. She won a Grammy for ‘Ain’t No Other Man.

Apart from a music career, she has appeared in movies as well. She appeared in a videography called Burlesque in 2010. Likewise, she also appeared in Zoe in 2018 and The Emoji Movie in 2017.

Who is Max Liron Bratman?

Max Liron Bratman is a cute little prince who was born with a silver spoon. Max gained huge popularity from his celebrity mother, Christina Aguilera who is a famous American singer as well as an actress.

Where was Max Liron Bratman born?

Who is Christina Aguilera?

Christina Aguilera is a famous American singer as well as an actress.