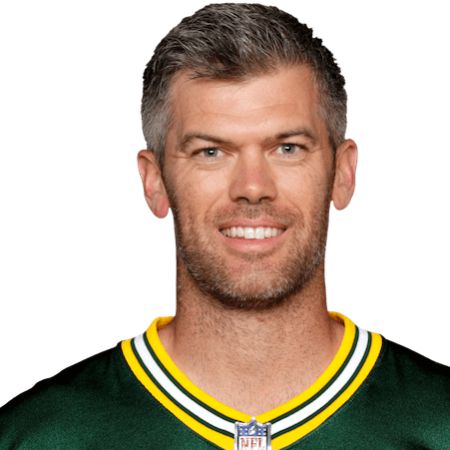 Mason Crosby is an American football player. He plays as a placekicker for the football team Green Bay Packers of the National Football League (NFL).

Mason Crosby was born as a Mason Walker Crosby on September 3, 1984, in Lubbock, Texas, the United States. As of 2019, he is 35 years old and his zodiac sign is Virgo. He was born as a child of his mother Karen and his father, Jim Crosby. Mason has two siblings-sister Ashley Fraser and brother Reed Crosby.

He is an American by his nationality and his ethnicity is white. Crosby finished his high schooling at Georgetown high school. He went to the University of Colorado, where he played for the Colorado Buffaloes football team from 2003 to 2006.

Actually, Mason has a towering height of 6 feet 1 inch and his weight is 94 kg. He has brown hair and hazel colored eyes.

Who is Mason Crosby Wife?

About his married life, Crosby tied the knot with Molly Ackerman on June 28, 2008. Molly is a second-year spokesperson for the Give-A-Kid-A-Book Campaign coordinated by the Friends of Brown County Library. However, the duo has not disclosed how they met first and about their dating history.

They are living their married life happily without any disturbances and problems. They have two children together. The first one is their son Nolan James who was born on August 15, 2010, and the second is their daughter Charlotte who was born in May 2013.

What is Mason Crosby Salary & Net Worth?

Mason Crosby earns a massive salary of $4,025,000 per year and has a net worth expected to be about $9 million. The deal also came with a signing bonus of $5 million as well as other incentives that include offseason and game day active roster bonuses.