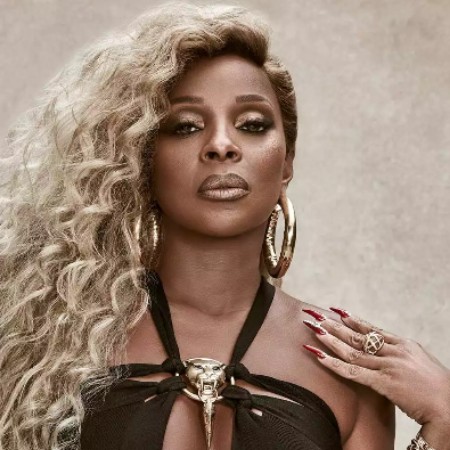 What is Mary J Blige’s Age?

Mary J Bligeopened her eyes to the beautiful world on January 11, 1971. She was born in The Bronx, New York, United States. As of 2022, Mary is 51 years old. Her zodiac sign is Capricorn. Mary celebrates her birthday on the 11th of Jan every year. Her parent’s name is Cora Blige and Thomas Blige. By profession, her father is a jazz musician and her mother is a nurse.

She is the second child of four children. He has an older sister, LaTonya Blige-DaCosta, a younger half-brother, Bruce Miller, and a younger half-sister, Jonquell. All of her siblings are from her mother’s later relationship with another man after divorcing her first husband. She holds American citizenship and belongs to an Afro-American ethnic background. Similarly, she follows Christianity as a religion.

Why did Mary J. Blige drop out of school?

Mary J Blige attended Theodore Roosevelt High School. As she was molested and harassed by her family and friends she had to endure years of sexual harassment. Due to this, she had to take the help of alcohol and drugs to endure the pain. And eventually, Mary had to drop out in her junior year of high school.

Mary seems to be single for now. However, she was once in a relationship with her ex-husband Kendu Isaacs. They met each other because of Queen Latifah. The duo was in a relationship for a very long time. They tied the knot on December 7, 2003. But their relationship didn’t last long and had to go their separate ways. They divorced each other in 2018.

What did Kendu Isaacs do to Mary J. Blige?

Kendu cheated on her by spending more than $420,000 on travel charges related to an affair with some woman. Mary also claimed that he refused to hand over her Grammy and other achievement awards.

Who was Mary J Blige previously engaged to?

Mary J. Blige has been previously engaged to K-Ci Hailey.  K-Ci is a singer in the popular R&B group Jodeci by profession. The dua was in a relationship since 1996. However, their relationship didn’t last long as Mary was in an abusive relationship with K-Ci that often turned violent. They split in 1997 and went their own way.

Why doesn’t Mary J Blige have a child?

During an interview with E! Daily Pop, she revealed that her relationship with her ex-husband, Kendu Isaacs, is the main reason she has never had children. Blige was married and she was an active stepmother to his three children during that time.

What is Mary J Blige’s Net Worth?

Where does Mary J Blige live?

Mary J. Blige seems to be residing in her 7,000-square-foot estate in Cresskill, NJ. The 18,250-square-foot country-French manor has eight bedrooms, ten full and three half-baths, a massive gym with a sauna, an indoor basketball court, a games room, a 14-seat home theater, and a wine cellar with a tasting room.

What kind of car does Mary J Blige drive?

As a millionaire, Mary owns a ton of expensive and high-rated cars. Some of her car collections are Tesla Roadster, BMW X5, Audi Q5, Range Rover, and many more.

How much did Mary J Blige pay her ex-husband?

Between 2016, when Mary first filed for divorce, and in 2018, when they settled, she was paying her ex-husband Martin Kendu Isaacs $30,000 per month. It was temporary spousal support, according to the information. The former couple reached an out-of-court settlement in March 2018, avoiding a potentially week-long trial.

No Mary and Glasy’s Knight are not related to each other in any way. But both of them happen to have the same profession as they are both singers.

No Mary and Puff are not related to each other. The duo just used to work with each other in music. But due to Mary’s reckless lifestyle, the duo quit working together.

How are Dr. Dre and Mary J. Blige connected?

Dr. Dre and Mary are connected to each other through music. As they teamed up to produce a hit song Family Affair in 2001.

What did Mary J Blige get addicted to?

Mary was addicted to cocaine. Due to her addiction, she could not attend the Grammy in 1995. The award program should have been the happiest moment of her life.

What disease does Mary J. Blige have?

Mary is a victim of breast cancer. It affected her in many ways. That prompted Blige to look inward and prioritize her own health.

How tall is Mary J Blige?

Mary stands at the height of 5 feet 9 inches. Her body weight according to her height is 66kg. Her whole body measurement is 36-32-38 inches. Similarly, she has an alluring pair of brown eyes and beautiful long curly brown hair.

Does Mary J Blige have a tattoo?

Yes, Mary has a tattoo engraved on her body. She has a butterfly tattoo on her shoulder blade, a flower rose on her thigh, and Chinese, and Japanese on the back of her hand. She removed a rose design that was on her left forearm while her right arm which had her name tattoed in Gothic lettering circling her bicep was also not there.