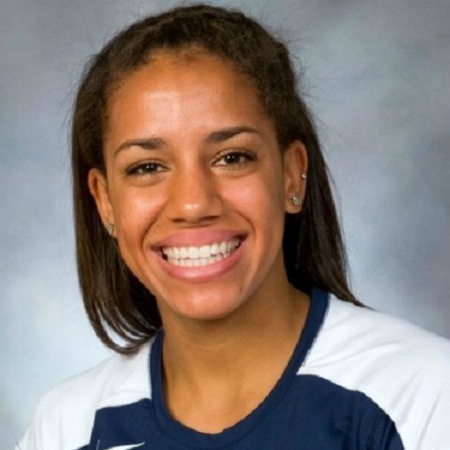 Mariah Riddlesprigger is an American volleyball player who came to the media spotlight as the girlfriend of a professional Greek basketball player, Giannis Antetokounmpo.

What is the Age of Mariah Riddlesprigger?

Her mother, Cathy served as a regional sales manager for Allstar Fire Equipment, Inc while her father is a businessman. She spent her childhood with her two siblings, Makayla Riddlesprigger and Maya Riddlesprigger. Both of her sisters are also excellent volleyball players like her. She often shares her sisters’ photos on her social media.

Mariah holds an American nationality while she belongs to an African-American ethnical background.

Mariah Riddlesprigger is in a romantic relationship with her boyfriend, Giannis Autetokoumpo. Her boyfriend, Giannis is a Greek basketball player who is currently playing for the Milwaukee Bucks of the National Basketball Association (NBA). Mariah and Giannis met for the first time in California, and later, their friendship blossomed into a love affair in the year 2017.

Mariah can be often seen on her boyfriend Mariah Riddlesprigger‘s Instagram account and she is close to Giannis’s family as well. Also, they regularly go on vacation together for refreshments. Looking at their Instagram pages, we can be sure that they are living a happy and blissful life together.

Mariah and Giannis are Expecting a Child!

Recently, they have shared the news to the media that they are pregnant and expecting their first child in October 2019. At that time, Mariah revealed the news through a public post on her Instagram post with a photo of Giannis’ Bucks jersey for babies where it was written ‘BABY Fr34K COMING SOON’ while the caption was:

“MVB “Most Valuable Baby on His way.”

Who is Mariah Riddlesprigger Boyfriend?

Mariah Riddlesprigger’s boyfriend, Giannis Autetokoumpo is a professional Greek basketball player for the Milwaukee Bucks of the National Basketball Association (NBA) who is popular for his nickname as the Greek Freak. He mainly plays forward but doubles as a guard, thanks to his amazing ball-handling skills. As he was interested in basketball since a young age, he started showing his amazing skills for the youth teams of Filathlitikos officially.

After finishing his deal with the youth team, he joined the club’s senior team in the year 2011. Later, Giannis announced himself qualified for the NBA Draft in 2013, and noticing this, the Bucks selected him for their 15th overall.

Due to his amazing speed and ball-handling skills in the game, he has received numerous awards in his career such as the Most Improved Player (2017), the NBA Most Valuable Player (2019), and so on.

What is the Net Worth of Mariah Riddlesprigger?

Mariah Riddlesprigger has an estimated net worth of around $100k as of 2022. The main source of her income comes from her professional career as a volleyball player. According to some online resources, the average salary of an American volleyball player is estimated at $43.23k.

On the other hand, her boyfriend, Giannis Autetokoumpo has an estimated net worth of around $60 million while his annual salary is $25 million.

How Tall is Mariah Riddlesprigger?

The Volleyball player, Mariah Riddlesprigger looks tall with a height of 5.9 feet. She has a tan skin tone and her eyes are black with dark brown colored hair. Her shoe size is 7 (UK). The player keeps maintaining her body sizes, hence, her body measurement looks perfect with 36-32-34 inches.

Her Career Journey starts from an Early Age

On her high school days, Mariah was honored with the title of Scholar-Athlete and the Junior League Senior Athlete Award.