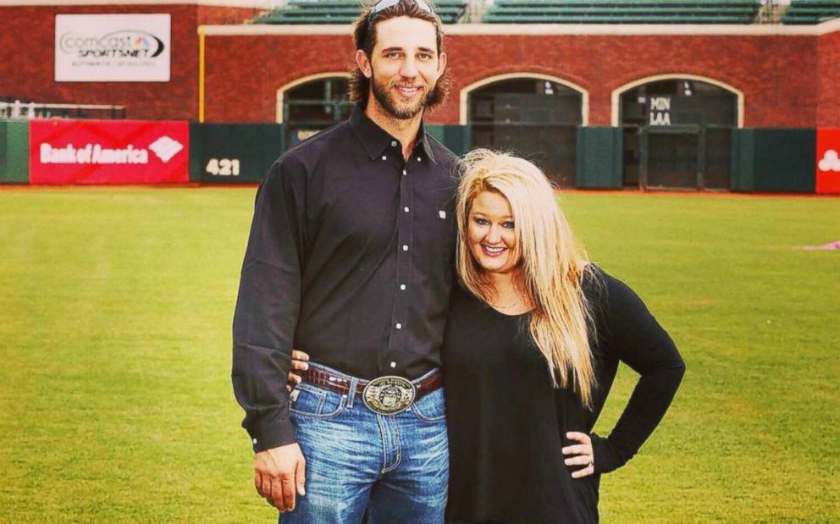 “Baseball Pitcher for the Arizona Diamondbacks” Madison Bumgarner & Wife’ Ali Bumgarner have been Married for 9 years; Are they still Together?

Madison Bumgarner is an American baseball pitcher who plays for San Franciso Giants of the Major League Baseball. Madison has won three World Series Championships and two Silver Slugger Awards. Kicking off his career in high school, he has now escalated into professional baseball through his dedication and hard work.

He is not only professionally successful but also his personal life is on a good note. Madison tied the wedding knot with Ali Saunders in February 2010.

Who is Madison Bumgarner Wife?

Baseball pitcher, Madison Bumgarner tied the wedding knot with his wife, Ali Saunders on Valentine’s Day in the year 2010. The couple met when they were kids and fell in love almost instantly. They went to South Caldwell High School where they got to know each other and started dating.

Their marriage was a private ceremony, with only family and friends attendants. Apparently, Bumgarner wore jeans on his wedding day. It is also said that his ring has Ali’s name on it.

The couple lives a happy life devoid of any problems. Off-season, they live on a farm situated in North Carolina, possibly close to where the two grew up. His wife, Ali is a witty person and loves to make fun of her over-weight issues. However, they haven’t share any kid as of now or they might be planning to have one.

Madison was born to parents, Kevin (father) and Debbie Bumgarner (mother). His parents separated when he was in Bumgarner attended South Caldwell High School in Hudson, North Carolina. He is the youngest in the family accompanied by a stepsister and two older where one of his half-sister, Dena, passed away in the year 2010 from cancer.

Caption: Madison Bumgarner with his family

He enrolled in the South Caldwell High School for his education. After that, he attended the University of North Carolina at Chapel Hill on a college baseball scholarship.

Where does Madison Bumgarner live?

As we already mentioned above, Madison Bumgarner married Ali Saunders on 14th February 2010, in a private ceremony in which he wore jeans. During the offseason, the couple lives on a farm in North Carolina that is about thirty minutes from where he grew up in the old furniture manufacturing area of the state, and during the season in a condo in San Francisco.