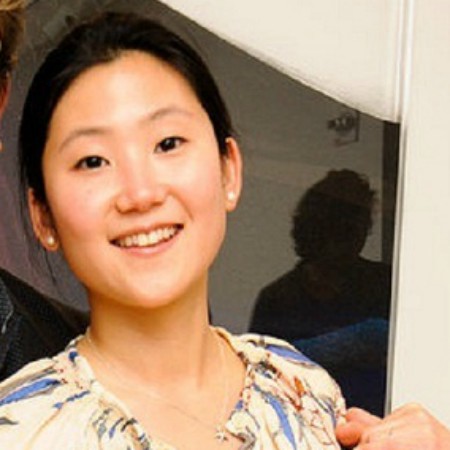 Non-entertainment industry personality, Lisha Bai is a Postwar & Contemporary artist by her occupation. Rather than her profession, Bai is best known as the wife of  American actor, Peter Scanavino.

What is Lisha Bai Nationality?

Beautiful artist Bai has an average type of body build. She stands on average height and weight. She has dark brown hair color and her eyes color is dark brown with white skin tone.

She was a student at Yale University which is located in New Haven, Connecticut. She achieved a BFA in painting at Washington University in St. Louis.

She then continued her studies and graduated in painting/printmaking at Yale University. In 2004 she was Terra Summer Residency Fellow in Giverny, France.

Lisa’s husband has an estimated net worth of around $1 Million as of 2020. The average salary of an actor is around $5,634 with a median bonus of $1,015 according to PayScale.

The postwar artist & painter, Lisa Bai is a married woman. She married Peter Scanavino. Lisa is one of those people who like to keep their personal life to themselves. One thing we do know is that he dated Peter Scanavino for quite a long time before the couple married.

Mother of 2 Kids from Married Life

The duo together has two children. Lisha gave birth to her second child, son Leo, on January 8, 2016. Their first child’s name is Ludo. Peter and Lisha never talk about their first child, but there are rumors that he or she is suffering from Down syndrome, as Peter tweets on Twitter.

The couple was also on Joyful Heart Galas to support Mariska’s foundation. Lisa and Peter are living a happily married life and there is no sign of divorce at all.

Her husband Peter is an American actor who was born on February 29, 1980. He is active in the entertainment industry since 2005. Also, he featured as ADA Dominick “Sonny” Carisi Jr. in the long-running NBC crime/legal drama series Law & Order: Special Victims Unit.

His debut as Travis he gave in the television movie Jonny Zero (2005). In his early acting days, he had minor roles in several television movies such as Third Watch, The Bedford Diaries, and Royal Pains.

In 2005, he appeared in the NBC crime series Law & Order: Criminal Intent in the fifth season of the episode “Diamond Dogs”. Thereby, in 2006 he made his film debut as Cult Leader in Under Surveillance (2006).

Bai’s Career as an Artist