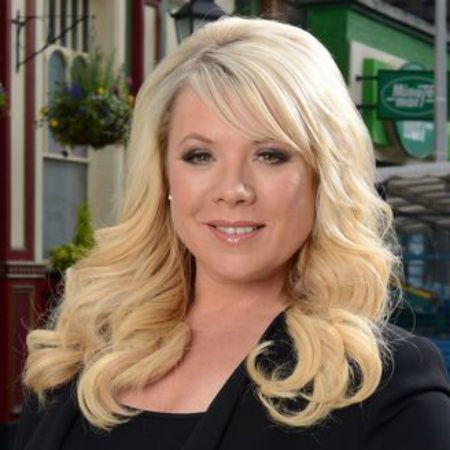 Letitia Dean is an English actress. She is famous for her appearance in the British soap opera, EastEnders as Sharon Watts.

Who are Letitia Dean’s Parents?

Letitia Dean was born as Letitia Jane Dean on 14th November 1967, in Potters Bar, Hertfordshire, England, UK. Her birth sign is Scorpio. Her father, Leslie was a tailor, and her mother Ellie Dean, was an English romantic novelist. She grew up with her two older brothers, Stephen and Martin. Her nationality is British and belongs to the white ethnicity.

She attended the Italia Conti Academy Theatre Arts at the age of 10, and later enrolled at the Sylvia Young Theatre School in Marylebone, London, which has famously created some of Britain’s most familiar television and musical stars. Furthermore, she stayed at the school as a full-time student for many years where she learned acting, singing, and dancing.

Who is Letitia Dean Husband? Does She Share Children with Her Husband?

Currently, Letitia Dean is a divorced woman. She has once married Jason Pethers. She met her husband Jason Pethers, on the set of EastEnders. After knowing each other for only a few months, the pair started dating each other and later engaged in 2001.

Furthermore, they tied the knot in September 2002 at All Saints’ Church in Marylebone, London, United Kingdom. Dean invited many of her EastEnders’ co-stars including Susan Tully who was a bridesmaid at the marriage ceremony.

Many of Dean’s fellow castmates from East Enders attended the wedding including Adam Woodyatt and Laila Morse. After five years of marriage, in 2007 it was announced that the couple separated, owing to the fact that Pethers was denied to have children.

Unfortunately, their divorce was finalized in 2008. After the divorce, Dean started dating Bowen Perrin, a model, and dancer. She met him on the set of the Ipswich panto production, Cinderella on Christmas.

However, their relationship didn’t last for long and they split up later because of irreconcilable differences between them. Now, she is single and is focusing on her work.

How much is Letitia Dean’s Net Worth?

Letitia Dean has an impressive amount of net worth of $10 Million as of 2019. Moreover, she earns a fruitful amount of salary from her profession.

Besides this, Dean co-starred in the British TV show, EastEnders with many famous stars including Lacey Turner whose net worth is $5 Million, and Katie Jarvis who is around $1 Million.

How tall is Letitia Dean?

Letitia is a slim and beautiful lady who has a height of 5 feet 4 inches with a weight of 52 kg. Similarly, her hair color is blonde and her eyes are brown. Her body measurement is 35-27-35.