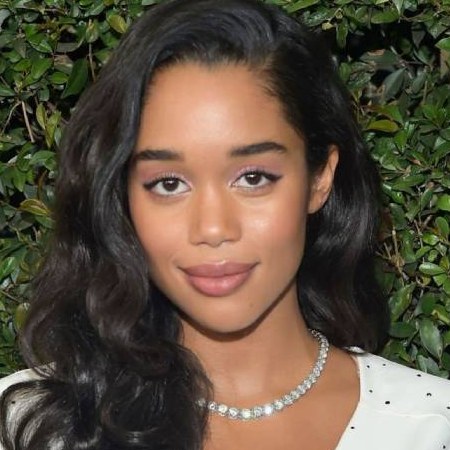 American actress Laura Harrier is widely famous for her representation of Destiny Evans in the momentary reboot of the American soap opera One Life to Live in 2013.

What is Laura Harrier’s Ethnicity?

Laura Harrier opened her eyes to this beautiful world on 28 March 1990. She was born in Chicago, Illinois, United States. As of 2022, Laura is 32 years old while her horoscope is Aries. Likewise, she celebrates her birthday every 28th of March. Her full name is Laura Ruth Harrier. Laura is the daughter of  Temujin Harrier (father) and  Linda Née Sagan (mother).

Her father is an Afro-American whereas, her mother is Scottish English. Laura’s father works in insurance while her mother works as a speech pathologist. She has a younger brother named Willian Harrier. She holds American citizenship while she belongs to mixed ethnicity (African-American, Rusyn, English, German, and Swiss-German). Moreover, she follows Catholicism as a religion.

Where did Laura Harrier go to College?

Harrier studied at Evanston Township High School where she took some drama classes. She decided to follow her acting career and went to the William Esper Studio to achieve her dream. After graduating from high school, she moved to New York City to study art history at the New York University Gallatin School of Individualized Study in 2008.

Is Laura Harrier in a relationship with Sam Jarou?

Yes, Laura is dating. She is in a relationship with Sam Jarou. Her boyfriend, Sam is an American consultant by profession. Besides, Jarou and Harrier confirmed their love for PDA  during a November 2021 trip to the beaches of Mexico.

Who did Laura Harrier previously date?

Also, she has dated Justin Theroux in 2018. They were first seen hanging out on a yacht and at Hotel du Cap-Eden-Roc in Antibes. She was also seen flirting with an American actor, Michael B Jordan at the SAG Awards on Sunday night. They were spotted together while she was touching his face and he was placing his hand around her waist.

What happened between Tom Holland and Laura Harrier?

During the shooting of the movie Spider-Man: Homecoming, the co-actors like Tom Holland, Laura Harrier, Zendaya, Jacob Batalon, and Tony Revolori, created a really good bond between them. They also told that they had a great experience working together.

What is Laura Harrier’s Net Worth?

Where does Laura Harrier live?

Laura lives in Los Angeles. After graduating high school, she moved to New York City and then after, to Los Angeles. Her Chic Silver Lake Home worth $3.5 million is kept for sale. It is located at Silver Lake, Los Angeles, California which was built in the year 2015. Her 3215 square feet house features 5 bedrooms and 4.5 bathrooms.

Yes, Laura is a vegetarian since she was eight. She says:

“I’ve never done a movie like it — it was interesting to have involvement in the creative process,”

How tall is Laura Harrier?

Laura stands at a height of around 5 feet 9 inches while she has a body weight of 56kg. Likewise, she has a body measurement of 34-24-34 inches. Besides, she has an alluring pair of dark brown eyes and black hair.

What did Laura Harrier wear at Met Gala 2022?

Laura wore a stunning black and silver H&M ball gown with a built-in corset and metallic detailing running from front to back. She added layers of chunky pearl necklaces, matching pearl drop earrings, and silver eye shadow to match Met Gala’s look with the beautiful dress. The dress was made in collaboration with Victor Glemaud.