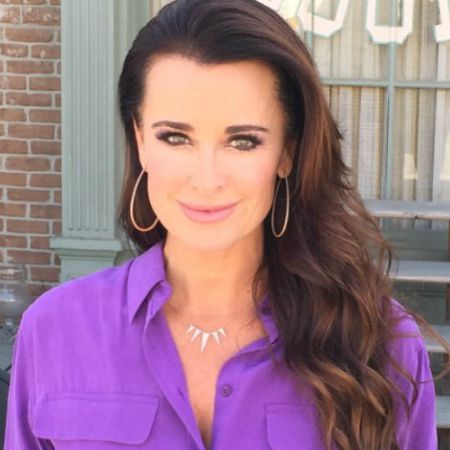 Kyle Richards is a professional American actress and television star. She has been starring in the hit TV series ”The Real Housewives of Beverly Hills” since 2010. She also appeared as a candidate in The New Celebrity Apprentice.

Her other films and TV series include Halloween, Down to Earth, City Guys, The Hungover Games, and more.

She also has two sisters Kim Richards and Kathy Hilton as well as two nieces Paris Hilton and Nicky Hilton. Kyle holds an American nationality. She belongs to the Judaism ethnicity.

Kyle Richards’s relationship with her Husband

Kyle met her husband Mauricio Umansky, a real estate agent in Los Angeles, in 1994. He is of Russian and Greek Jewish descent. Umansky is the son of Estella Sneider. He was born and raised in Mexico. The two married on January 20, 1996, when Kyle was four months pregnant. Alexia, her daughter, was born on 18 June 1996.

They had two other daughters, Sophia (born in 2000) and Portia (born in 2008). Kyle, who is of English, Irish and Welsh descent, converted to modern Orthodox Judaism when she married Umansky. She also attends events at the Kabbalah Center in Los Angeles.

Who is Kyle Richard’s Ex-Husband?

Before Kyle met Umansky her current husband she was married before to Guraish Aldjufrie from Indonesia at the age of 18 married in 1988. At that time she was pregnant with their daughter Farrah. However,  they separated in 1990 and divorced two years later.

The evaluation of Kyle Richards’s net worth is to be around $20 million. The duo Kyle and Mauricio purchased a house located on a quiet cul de sac in Bel Air, California, the six-bedroom, eight-bathroom house for just over $3 million in 2011. The couple listed the property for $6.995 million.

Richards has Been a Part of  Rumors

Once there was a rumor from Kyle that her husband Mauricio Umansky had cheated and flirted with another woman. But she made it clear that he had not done that before, and she loves him the same way she used to. In addition, she has never been controversial in her career so far.

Richards’s career as an Actress