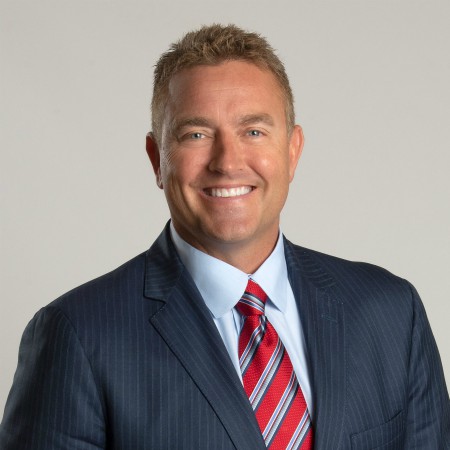 College Sweetheart turned into Wife; Net Worth of Kirk Herbstreit 2022

An American sports analyst and sports commentator, Kirk Herbstreit is considered to be the face of College Football. He currently works as the co-host for the College GameDay broadcast on ESPN. Also, he works as an analyst for ESPN and ABC.

On August 19, 1969, Kirk was born to parents Jim Herbstreit and Judy Herbstrei in Centerville, Ohio. His father Jim was a former player who worked as an assistant coach at Ohio State. Having American nationality, Herbstreit belongs to the white ethnicity. He has a siblings’ sister Terri Holmes.

He completed high school education from Centreville High School in Centerville, Ohio, a suburb of Dayton. Herbstreit was enthusiastic about football during high school. He enrolled at Ohio State University located in Columbus, Ohio.

The lover met in the college for the first time. In college, he was the starting QB for the Buckeyes. But his wife Allison Butler was cheering on the team as a member of the Ohio State cheerleading squad. Since then the couple has been together. Kirk popped the question after dating for about four years.

He spends quality time with his family despite having a busy schedule. He is a family man who travels to different t places with his family. Also, he often attends his son’s games to support them. So he is having a blissful married life with his wife.

Why did His Family Force leave Ohio?

Kirk Herbstreit’s family was forced to leave Ohio when his home address was published in public. His popularity came after working as an analyst for various sports networks. Fans of Ohio State Buckeyes took exception to the fact one of their own was criticizing them on national television.

His honest opinions vitriolic fans were making life difficult for Kirk and his family. He said there were cars passing his house daily, stopping near his porch, and driving off. After suffering his wife called him crying. Then the family moved from Ohio to their new home in Tennessee.

Net Worth & Salary of Kirk Herbstreit

The journalist Herbstreit has earned a massive net worth from his work. He receives an annual salary of $2 million as per the contract. As of 2022, Kirk Herbstreit has an estimated net worth of $4 million. He is one of the most decorated college football reporters.

Kirk still works for ESPN and earns a handsome sum of money. Also, he was involved in charity works spending millions of dollars for good causes. He actively took part in raising funds for programs such as the 2012 Buckeye Cruise for Cancer and The Make A Wish Foundation Ultimate Sports Auction. He is living a life full of comfort out of his earning.

His height is 6 feet 3 inches i.e 1.93 m tall. While he stands at a weight of around 65 kg. He has blonde hair color with hazel eyes color.