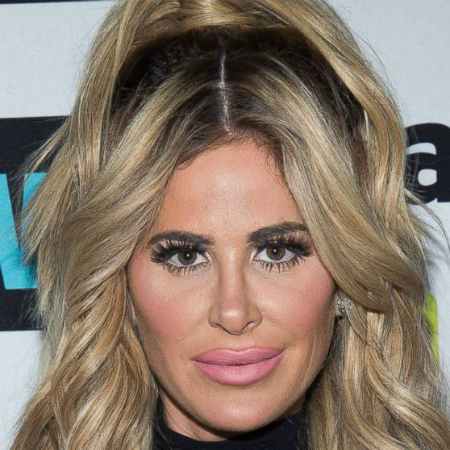 Kim Zolciak is an American television personality as well as a singer. She is a famous reality show star who became popular for appearing as one of the original housewives on the reality television series The Real Housewives of Atlanta.

Kim Zolciak was born on 19 May 1978, in Pensacola, Florida, United States. Currently, she is 41 years old and her sun sign is Taurus. She belongs to a military family with parents Karen Zolciak(mother) and Joe Zolciak(father). Her brother’s name is Michael Zolciak.

She is an American by her nationality and is of Polish and Italian ethnicity. She grew up in Windsor Locks, Connecticut with her brother. Concerning her education, she attended East Catholic High School in Manchester, Connecticut.

Then she studied at the University of Connecticut and studied nursing and graduated with a nursing degree in 1996. At the age of 21, she moved to Atlanta, Georgia with her parents and worked there as a nurse.

Who is Kim Zolciak Married to?

Zolciak has been married twice in her life. Her first husband was Daniel Toce. They began dating each other back in the mid-1990s. She even gave birth to her first child Brielle in the year 1997.  After a few years of their relationship, the couple got married on May 5, 2001.

Again, the duo welcomed their second daughter, Ariana on October 17, 2001. However, just after two years of their marriage, the couple divorced in 2003.

After her divorce, she stayed single for almost six years and she began dating Big Poppa in 2009. Their relationship lasted for a year and they also separated in 2010. Secondly, Kim got married on November 11, 2011, to the American football star Kroy Biermann. The duo met each other for the first time at the charity event Dancing with Atlanta Stars in May 2010.

They together shared four children named Kroy Jagger, Kash Kade, and twins Kaia Rose and Kane Ren. Once Kim was rumored to be bisexual and she was dating the American DJ Tracy Young in 2010.

How much is Kim Zolciak Net Worth and Salary?

Currently, she has a net worth of $1.5 million as of 2022. Apart from that, her salary for Don’t Be Tardy is $1 million which is more than most other Bravo stars make. Besides this, she launched a skincare line in May 2016 as well as a perfume.

In addition, her income for the show for the first five seasons was about $600,000 per season, thus for the 5 seasons, Kim earned nearly $3 million-plus an additional $150,000 for reunions.

Kim and her family live in a 17,000-square-foot Atlanta mansion in the exclusive neighborhood of Alpharetta. The mansion was valued at $3.7 million. However, when the developers were faced with bankruptcy, Kim bought the foreclosed property for a meager $800,000 steal.

Zolciak has a height of 5 feet 9 inches tall. She has blonde hair and light brown eyes. Her body measurements are 41-28-39 inches.

Zolciak has boldly admitted to going under the knife a number of times. She has had several Botox injections including one she did to perfect her cellulite dimples. She has gotten many lip fillers which is probably the body modification she has been slammed for the most.

Kim has had cellulite injections and undergone breast enhancement and tummy tuck procedures. However, she has denied rumors that she has done facial plastic surgery.

Kim also competed in the 21st season of the dancing competition show Dancing with the Stars. Similarly, in September 2015, she had a transient ischemic attack due to which she left the show.

She made her music debut in 2009, releasing a dance track “Tardy for the Party“. In May 2016, Zolciak launched a line of skin-care products called Kashmere Collections. Later that year, she began working on a perfume called Kashmere.