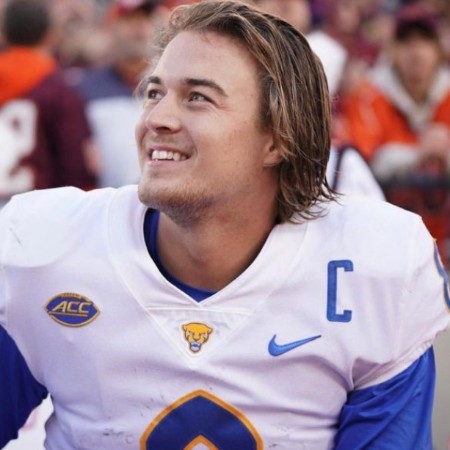 American football quarterback Kenneth Shane Pickett came into the limelight after he started playing as a quarterback for the Pittsburgh Steelers of the National Football League.

Who are Kenny Pickett’s Parents?

Kenny Pickett opened his eyes to this beautiful world on June 6 of 1998 in Ocean Township, New Jersey, in the United States of America. This makes Kenny 24 years old as of now. Kenny loves to celebrate his birthday every June 6 with his friends and family. According to his date of birth, Kenny falls under the Gemini sun sign. The name of Kenny’s father is Ken Pickett. Likewise, the name of his mother is Kasey Pickett.

The father of Kenny is the All-America linebacker at Shippensburg University as well as a member of the school’s Athletic Hall of Fame. He has one sister as his sibling whose name is Alex Pickett. She is a soccer player at East Stroudsburg University. Kenny holds American nationality and belongs to white ethnic background. Likewise, he has faith and belief in the Christian religion.

Where did Kenny Puckett go to College?

Puckett completed his higher-level schooling at Ocean Township High School. After high school, he enrolled himself at the University of Pittsburgh in the year 2017. He graduate from the university in the year 2021. Additionally, he has also gained a degree of bachelor in marketing from the Joseph M. Katz Graduate School of Business as well.

Kenny is currently engaged to his long term-girlfriend, Amy Paternoster. By profession, Kenny’s finance Amy is a soccer player at the Princeton Tigers. She plays the position of forward. In the beginning, the pairs had kept their relationship private but they revealed their relationship in April of the year 2021.

What is Kenny Pickett’s Net Worth?

As of 2022, Kenny has an estimated net worth of $5 million approximately. He is earning this massive amount of money from his professional career as a football player. He signed contracts with different teams for various periods of time which pays him a very good sum of money.

As his annual salary, Kenny is getting $3.5 million. Besides these, he always gets very handsome pay from the paid partnership and sponsorship as well.

How long is Kenny Pickett’s Contract?

Kenny has done the contract for the duration of four years with the Pittsburgh Steelers. He did the deal for the worth of $14.1 million. Due to this contract, he is getting an annual salary in the range of $3.5 million.

What is the Current Team of Kenny Pickett?

As of now, Kenny is playing for the Pittsburgh Steelers. He is playing at the position of #8 / Quarterback.

Kenny brought a great impact from Buccaneers linebacker Devin White while tossing a pass midway. Though he was capable to complete the pass, he reached up hurt on the play. After the injury, Kenny moved to the blue medical tent and later to the safe room after the major hit.

How tall is Kenny Pickett?

Kenny stands at the height of 6 feet 3 inches tall. He has a body weight of 100 kg. On the other hand, he has an attractive pair of dark brown color eyes and brown color hair.