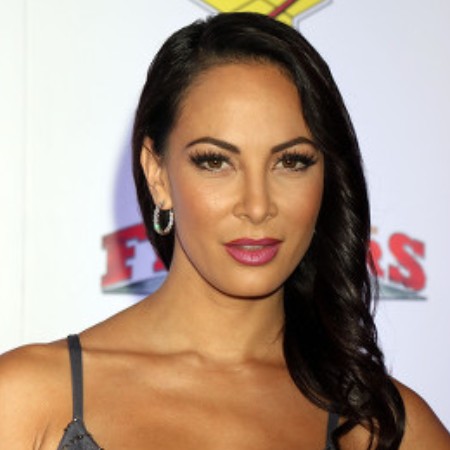 Model and television host Kenda Perez is famous as the host of a Fox sports program called Best of Pride Fighting Championships.

What Nationality is Kenda Perez?

Kenda Perez opened her eyes to its beautiful world on May 18, 1983. She was born in Laguna Beach, CA. As of 2022, she is 39 years old. According to her date of birth, her horoscope is Taurus. Kenda celebrates her birthday on the 18th of May every year.

Kenda was born to Ken Perez (father) and Kaye Perez (mother). She holds American citizenship and follows Christianity as a religion. Similarly, she belongs to white ethnic background.

Did Kenda Perez go to College?

Kenda went to Orange Coast College. She joined the college to study to be a preschool teacher before leaving to pursue a modeling career.

Who is Kenda Perez’s Husband?

Did Kenda Perez and Dominick Cruz ever date?

There was a rumor about Kenda and Dominick dating for a while. But it was just a rumor and they were never in a relationship. By profession, Dominick is an MMA player.

Does Kenda Perez have children?

Kenda is the mother of three children. She and her husband have given birth to a daughter and a twins son. Their names are Royal Rae Swanson (born on August 21, 2017 ), and identical twin boys, Saint Cub Swanson and King Cub Swanson (born September 2, 2018).

What is Kenda Perez’s Net Worth?

Kenda has an estimated net worth of around $1.5 million as of 2022. She collected that sum of money from her career as an American model and as the host of a Fox sports program.

An average salary of an American model and host is around as high as $401,500 to as low as $11,000 according to the source. She might be earning between the same digit.

Where does Kenda Perez live?

Cub currently competes in the Ultimate Fighting Championship’s Featherweight division (UFC). He has been a professional since 2004, and he has eight post-fight bonus awards in division history. During his WEC tenure, he was named Fight of the Night ten times.

Where did Cub Swanson train?

Cub Swanson, a UFC featherweight fighter, laughs with friends he trains with at Joel Diaz’s boxing gym before sparring on December 3, 2021, in Indio, Calif.

Is Cub Swanson in a hall of fame?

Cub Swanson was recently inducted into the UFC Hall of Fame for one of the greatest fights, outlasting Doo Ho Choi in a barnburner in 2016.

For how many years did Kenda Perez host an online MMA show?

For two years, Kenda hosted The Ultimate Show, a weekly online MMA show for BleacherReport.com that debuted on August 4, 2011.

How tall is Kenda Perez?

Kenda stands at the height of 5 feet 7 inches and her body measurement is 55kg. Similarly, she has an alluring pair of brown eyes and beautiful brown hair.

Which ethnicity does Kenda Perez belong to?

Where did Kenda Perez go to College?

Kenda went to Orange Coast College. She joined the college to study to be a preschool teacher before leaving to pursue a modeling career.

Where does Kenda Perez live now?

What is the height of Kenda Perez?

Kenda stands at the height of 5 feet 7 inches tall.