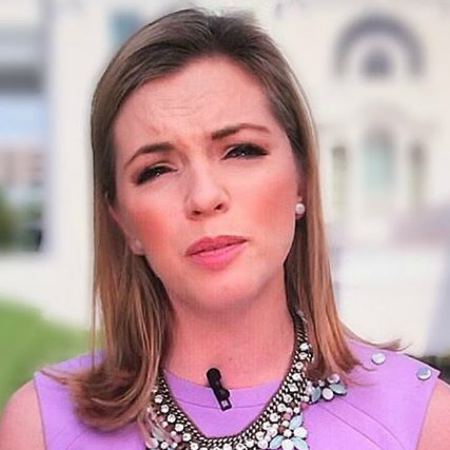 Salary and Net Worth of Kayla Tausche; Is Broadcaster still Married?

Kayla Tausche is an American broadcast journalist as well as a news anchor. She is famous for her work on CNBC and anchoring the shows like Squawk Box, Squawk on the Street, etc.

What is the Nationality of Kayla Tausche?

Kayla Tausche was born Kayla McCall Tausche on July 17, 1986, in Minneapolis, Minnesota, U.S.A. As of 2022, she is 36 years old and her sun sign is Aquarius. The name of her parents is Karen C. Tausche and Kurt C. Tausche.

Her father is the owner of brand development and advertising agency in Atlanta. She was interested in studying from her childhood and was always encouraged by her parents. She was a good student in school too. She holds the nationality of American and her ethnicity is North American. Similarly, she follows the Christianity religion.

Concerning her education, she attended Greater Atlanta Christian School. Later on, she joined the University of North Carolina with a major in business journalism and international politics. She was also a member of the cheerleading team in college.

Tausche is a married woman. She married Jeffrey Jacob Izant. He is a law clerk in the United States District Court for the Eastern District of New York. The couple tied the knot on 11 April 2015.

They welcomed their first daughter, Catherine Clancy Izant on September 7, 2018.

How much is Kayla Tausche Net Worth and Salary?

Tausche has earned a considerable amount of money from her journalism career. As she is a broadcast journalist and is paid around $54,352 per annum.

Kayla amassed a huge fortune and has an estimated net worth of $3.5 million. Similarly, she earns a hefty salary of $2 million from her profession annually. Previously, her net worth in 2017 was $3 million.

As per Glassdoor, the average salary of a CNBC anchor is $647,061 annually. Nevertheless, the talented news anchor, and finance analyst, Kayla might get a full-scale salary because of her experience in the field.

Later on, she joined the DealReporter unit of Mergermarket. During the late 2000s, She also made a guest appearance on CNBC and CNBC World to discuss mergers and acquisitions.

Moreover, she joined CNBC in January 2011 as a general assignment reporter and worked in finance and deals for CNBC’s business day programming. Similarly, she is also a news contributor to MSNBC, Today, Weekend Today, and so on.

She also worked as a deal reporter for several months. She was mainly popularized and received honors for her in-depth research in analyzing the coverage of Hong Kong from British to Chinese rule by different international newspapers.

In addition, she has done analysis and reports on the Facebook IPO and received huge coverage and fame. Likewise, on the 2nd of May 2014, she became the co-anchor of the news program, Squawk Alley. Due to her hard work and experience, she will surely receive more and more awards in her future days.