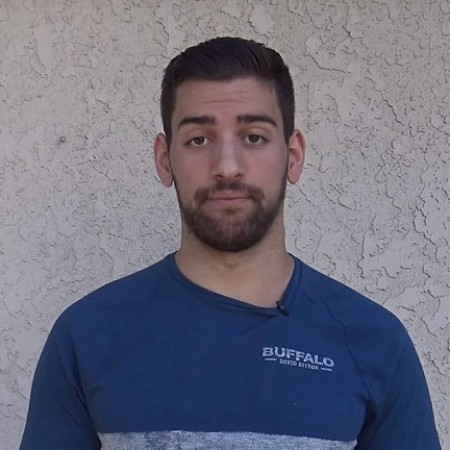 What is the Age of Joey Salads?

On 10th December 1993, Joey Salads was born in Staten Island, New York, The United States of America. As of 2021, his age is 27 years old while his horoscope is Sagittarius. His birth name is Joseph Peter Saladino. He grew up with her two sisters. Joey holds an American nationality while he belongs to white ethnical background.

He completed his high school education at St Joseph by-the-Sea High School in Staten Island, New York. After that, he attended classes at the College of Staten Island but claims to have “learned nothing” there and dropped out of the college to start his YouTube career.

Who is Joey Salads Girlfriend?

Joey Salads is in a romantic relationship with his girlfriend, Gila Goodman. His girlfriend, Gila is also a social media star. The couple rarely shares photos of each other together on their respective social media accounts. He has done many prank videos on Gila and has posted them on his Youtube and Instagram accounts. As of now, Joey and Gila are living a lavish lifestyle without any sign of breakup or separation.

Previously, he was involved in an affair with a social media personality, Tanisha Coetzee. They met each other for the first time while filming a prank video and they eventually started to date. However, the couple broke their relationship in early 2018. Some fans blamed the reason for their breakup was Joey’s abusive behavior and his pranks on Tanisha. However, Tanisha cleared their doubts and said while they were dating, he always treated her like a princess.

How much is Joey Salads’s Net Worth?

Joey Salads has an estimated net worth of around $1.2 million as of 2022. He has earned this amount through his career as a YouTuber and prankster. According to some online resources, the average salary of a Youtuber in the United States is $82k per year.

Being a media personality, he surely earns some amount through endorsements, advertisements, and sponsorships of several brands and companies.  Joey is living a lavish and fulfilling lifestyle with his family members in the United States.

How Tall is Joey Salads?

Joey Salads stands at a height of 5 feet 8 inches tall with matching body weight. His other body measurements like his chest size, hip size, waist size, shoe size, etc are still missing from the media. Joey’s hair and eyes are dark brown in color.

What happened to Joey Salads?

Joey was permanently suspended from Twitter in 2020. A Twitter spokesperson told the digital media company, Daily Dot that

On 12th May 2021, he uploaded a video in response to the suspension on his Twitter. He told his fans:

“This screws me up because I was getting almost 200 million impressions on my Twitter each month, gaining probably 50 to 60 thousand followers a month recently. And I was using all of those follows, pushing them over to this YouTube account, pushing them over to my podcast, and now guess what? I’m screwed. Because I’m not going to be able to grow anymore. I was relying on Twitter for my growth.”