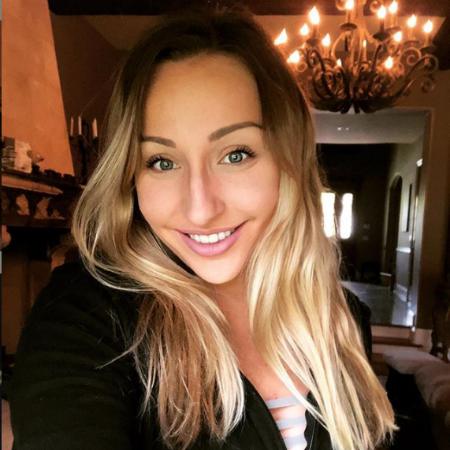 Jessica Goch is an American talent manager who came to the limelight after managing gaming sensation Ninja and marrying him.

She loved gaming as a child and played Sonic on the Sega video game as well. Her husband Ninja is one of the most famous gamers in the world who regularly wins gaming events.

Jessica Goch entered this earth on the 23rd of June 1992 in Schofield, Wisconsin, USA. Her star sign is Cancer. She is the daughter of mother Darcy Goch. She has an elder brother named Joshua Goch with whom she used to play video games as a child.

Jessica belongs to white ethnicity and is American by nationality. She is a big fan of the famous game Super Mario which is owned by Nintendo. Regarding her education, she attended Wausau West High School and graduated in 2010.

After that, she studied Interpersonal Communication (Emphasis on Health and Wellness) and Human Resource Management at the University of Wisconsin-Whitewater and she graduated in the year 2014.

Is Jessica Goch Married? Who is her Husband?

Jessica Goch is a married woman, she married a famous gamer Ninja in 2017. Ninja is the gaming name of  Tyler Blevins. They dated for a long time before getting married in August 2017.

The couple is both gamers but Tyler is a professional player while Goch is a gaming manager who was working as his manager before they started dating. Goch has not given birth to any children with her husband Ninza yet.

What is the Net Worth & Salary of Jessica Goch?

Jessica Goch has an estimated net worth of $2 million as of 2022. She has been active as a gaming manager for a few years and before she landed the job, she worked in various sectors from which she has accumulated her net worth. According to the sources, an average talent manager earns around $75,000 annually so she might be getting this amount as well.

On the other hand, her husband Ninja is an American social media personality who has a net worth of $15 million as of 2019. Likewise, he earned approximately $500,000 in March alone and he told ESPN that his monthly earnings have reached 6 figures.

Besides this, he has more than 17 million YouTube subscribers. At $5 a month per subscription, Ninja regularly earns between $500,000 and $1 million per month playing video games.

At one time Ninja was one of the top-ranked Halo who reaches players in the world and started earning at least $100 per day by streaming his gaming. Looking at this we are that the couple is enjoying their lavish lifestyle in a luxurious way.

What is the Height of Jessica Goch?

The beautiful talent manager Goch stands on the average height of 5 feet 5 inches with matching body weight of 57 kg. She has an attractive pair of Hazel eyes and blond hair color with white skin ton.

Further, She has a slim and curvy body with a measurement of 34-27-36 inches which include her bust size, waist size, and hip size respectively