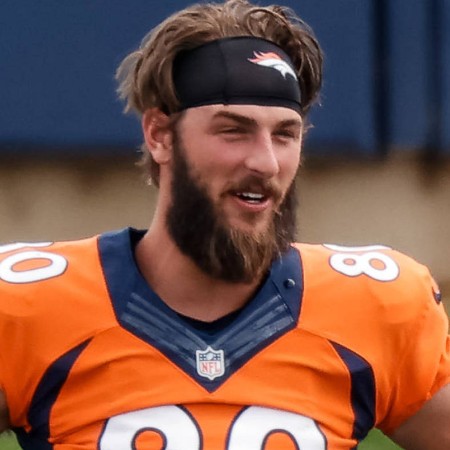 A former American football tight end of the National Football League Jake Butt came into the spotlight after he started playing college football at Michigan.

Where is Jake Butt from?

Jake Butt came into this world on July 11, 1995. He was born in Pickerington, Ohio in the United States of America. This makes Jake 28 years old as of now. By birth, the full name of Jake is Jonathan Duane “Jake” Butt. He celebrates his birthday every 11 of July with his friends and family. According to astrology, she falls under the Cancer sun sign.

The name of his father is Rob Butt. Similarly, the name of his mother of Meg Lally. Butt has two brothers as his siblings. The name of his brothers is Zac Butt and Andrew Butt. Jake holds the American nationality and belongs to white ethnic background. Likewise, Butt has faith and belief in the Christian religion.

Where did Jake Butt complete his study?

Jake has gone to a public high school named Pickerington High School North for his primary level schooling. He was associated with the football team when he was in that high school. Jake grabbed 96 passes for 1,361 yards with 20 touchdowns and publicized 142 tackles and 20.5 sacks during his high school time.

After that, he enrolled himself at the University of Michigan in the year 2013. He completed his study in the year 2016 with a degree in sociology from the College of Literature, Science, and the Arts.

Who is Jake Butt married to?

Jake is living a married life as of now. He is married to his beloved girlfriend Natalie Carti. The pairs met each other when they were in high school. Since then they are in a relationship with each other. Natalie was also an athlete when she was in her college days. She was an active participant on the lacrosse team.

Jake has even mentioned Carti on his Instagram bio writing wifey. They are seen visiting and spending time with each other a lot. They even posted each other on their official social media accounts more often. They live together with their pets currently. They have support for each other in every way possible.

What is Jake Butt’s Net Worth?

As of 2022, Jake has an estimated net worth of $3 million approximately. The main source of income for this huge net worth is his successful career as a football player. He earns a hefty sum of money from the contacts he signs with many teams for a certain period of time.

He has an average salary of $850,000 approximately. He is living a very lavish and comfortable life with her partner right now. In the coming days as well he will be earning a lot of money after more games under his name.

How long is Jake Butt’s Contract?

How tall is Jake Butt?

Jake stands at a height of 6 feet 6 inches tall. He has a bodyweight of 113 kgs. Similarly, he has attractive pair of blue color eyes and brown color hair.

Who selected Jake Butt for NFL?

In the 2017 NFL, Denver Broncos drafted Jake for the NFL. He was selected in the fifth round and was the 145th general pick.

What is Jake Butt’s Injury?

Jake has suffered from a hamstring injury. Due to his injury, he has a very limited impression in the 2020 season. On the other hand, he did not recreate in the 2019 season as well. Jake also sorrowed a pair of torn ACLs while recreating at Michigan.

When did Jake Butt retire?

Jake announced his retirement from his football career on July 28 of the year 2021. Before that, he signed a contract with the Chicago Bears on June 18 of the same year.

He said he does not have that burning fire for football anymore. Additionally, he was also suffering from many injuries during the play. However, he also mentioned football has given him some of the best times of his life and has helped in many ways.