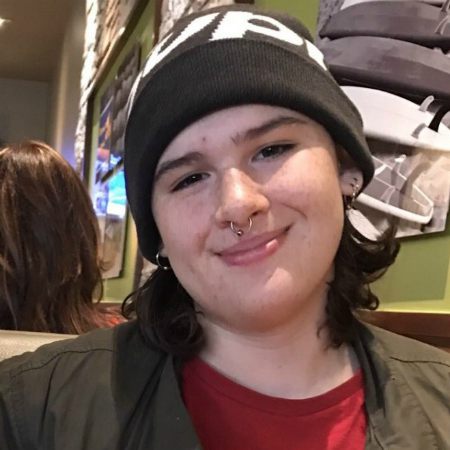 Jade Logue is the transgender teenage daughter of the famous actor Donal Logue who plays Harvey Bullock in the television series Gotham. Jade made headlines in the summer of 2017 after she went missing only a week after her sixteenth birthday. Later, she was found safe and sound in North Carolina.

Jade Logue was born as Arlo Logue on 25th March 2001, in Brooklyn, New York, the United States of America to Donal Logue (father) and his former wife Kasey Walker-Smith (mother). As of 2019, her age is 18 years old and her birth sign is Aries.

Jade is the younger of two children born to her parents. Her older brother’s name is Finn Logue. She had a happy childhood and was raised in a loving and supportive environment.

Although Jade Logue used to be a boy, she identified more like a girl while growing up. Her family was aware of Logue’s true gender identity and was very supportive of her decision to undergo the process of transitioning from a boy to a girl. It was then that her name was changed from Arlo to Jade. At the age of 15, she publicly announced that she was transgender. However, she received a lot of support from the public, especially from the LGBTQ community.

After she became openly transgender, Jade Logue began changing her physical appearance so she looked more like a girl. She grew out her hair, started dressing more like a woman, and began taking hormone shots and pills that also made her body change and developed like a woman.

In mid-2017, Jade Logue went out to meet a friend and never came home. Her father was unable to contact her and without any way to find out her whereabouts, he went online and posted a tweet stating that his child had gone missing, but had not ‘run away. Later, he deleted the tweet and launched a wide public appeal to find her and asking for help from the police.

The FBI and the National Center for Missing and Exploited Children also helped them. There were some questions as to whether or not the child had just run away from home and was not really missing but Donal went to clarify online that Jade was indeed missing according to his discussion with the authorities.

After two weeks, Jade Logue was found 400 miles away from home in North Carolina and was promptly returned to her parents. There was no statement as to why she ended up there, or if she really did run away. Her father, Donal posted a thank you to all the supporters and organizations that helped him with the search. After finding her, Donal continued posting heartfelt messages and photos on various social media websites.

There are no details on her net worth as Jade is not involved in any business. Currently, she is enjoying her father’s net worth. Her father, Donal Logue has an estimated net worth of around $3 million at present. He has earned a huge amount of money from his career as an actor.

Moving towards her personal life, Jade Logue is unmarried and is not dating anyone at the moment. Some online resources state that she is still young and likely not focused on any romance. As of now, she might be focused on her studies.

Like many celebrities and famous people, Jade has also kept her personal and love life quite private. She has dark brown hair and eyes color too.