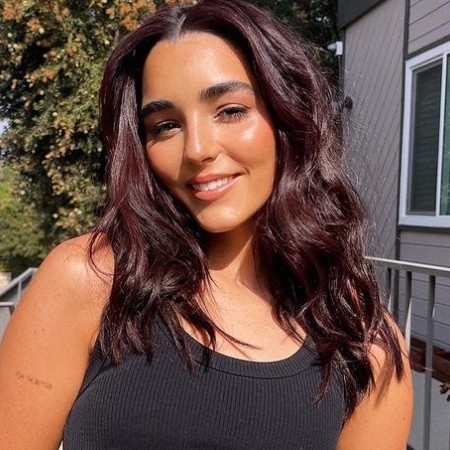 Australian singer, social media personality, model, and actress Indiana Massara came into the spotlight after she started modeling at the very young age of 13.

Where is Indiana Massara from?

Indiana Massara open her eyes to this beautiful world on 23 August 2002 in Coolbinia, Australia. This makes Indiana 20 years old as of now. Indiana celebrates her birthday every 23 August with her friends and family. The full name of Indiana by birth is Indiana Marie Ella Massara. According to her date of birth, she falls under the Virgo sun sign.

Indiana is the daughter of Ian Massara (father) and Julie Massara (mother). She has one elder brother as her sibling whose name is Presley Massara. Indiana holds Australian nationality and belongs to Italian, Irish, English, and Albanian descent. Likewise, she has faith in the Christian religion.

What College did Indiana Massara attend?

Massara went to Los Angeles, California in the United States of America in order to move forward in her acting career. She went to Mercedes College in the City of Perth for her study.

Indiana is rumored to be dating Zack Justice since 2021. They were seen showing PDAs most of the time. On her 19th birthday of Massara,  Zack wished her a sweet message along with a trip to Nevada. They even created a meem related to relationships and that was uploaded on the Instagram of Zack.

The pairs were spotted many times hanging out with each other in Disney Land of Los Angeles. By seeing all these the fans assumed that they are secretly dating each other. However, they have not confirmed their relationship. Recently a well, she wished Zack on her Instagram by posting a photo of herself with Zack with the caption:

“I could write a million things but I don’t care enough. Happy Birthday you annoying human.”

Who did Indiana Massara date before?

Indiana has been in many relationships in her past days. She was in a relationship with Kio Cyr in the year 2020. She and Kio could not take their relationship to next level so they broke up after dating each other for a short period of time.

In the year 2018, she dated Jay Ulloa. She dated Ulloa for one year and she broke up in the year 2019. Before that, she also dated Matt Sato and Blake Gray in her past. She was rumored to be dating Matt because both of them were in the same web show Chicken Girls.

What is the Net Worth of Indiana Massara?

As of 2022, Indiana has an estimated net worth of $565,000 approximately. She is earning this huge sum of money from her professional career of acting and singing. Massara has her own youtube channel from which she gains a hefty sum of money on a daily basis.

The yearly income of Indiana is around $406 to $6.5K. She is earning this income from her youtube career. Indiana also earns good fortune from paid partnerships and sponsorship as well.

How tall is Indiana Massara?

Indiana has a height of 5 feet 7 inches tall. She has a body weight of 55kgs. Indiana has an attractive pair of hazel eyes and black hair.

Which ethnic background does Indiana Massara belong to?

What College did Indiana Massara attend?

Massara went to Mercedes College in the City of Perth for her study.

How tall is Indiana Massara?

Indiana has a height of 5 feet 7 inches tall.