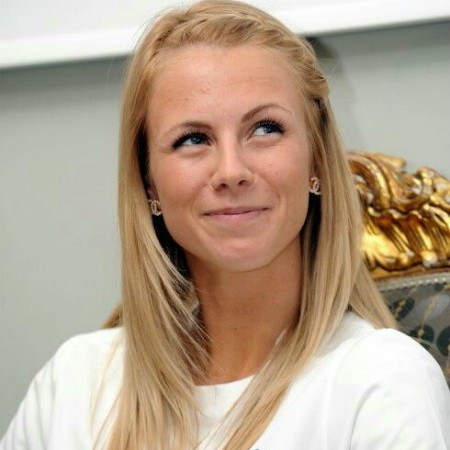 Grete Sadeiko is a heptathlete and best known as the wife of Robert Griffin III.

Grete Sadeiko was born on May 29, 1993, in Turi, Estonia. As of 2019, Grete turned 26 years old. She is the daughter of Deivi Sadeiko. She has a sister named Grit Sadeiko as her sibling. She holds Estonian nationality whereas her ethnicity is unknown.

Though she was born in Estonia, she moved to the US in order to attend college. She attended Florida University in 2012 and graduated from there. Moreover, she attended Turi Uhisgumnaasium high school when she was in Estonia. Grete stands at a height of 5 feet 10 inches

Wedding & Husband of Grete Sadeiko; Blessed with a Daughter

Discussing her personal life, Grete is a married woman. She is married to great NFL player Robert Griffin III. the couple began dating in the year 2016. Then after that, the pair engaged on 13 May 2017. After two months after their engagement in July, Grete gave birth to a baby girl Gloria Griffin.

The couple exchanged their wedding vows on 10 March 2018. Talking about their previous marriage and affairs, Robert was previously married to Rebecca Liddicoat on 6th July 2013. Moreover, the couple also shares children named Reese Ann Griffin, on 21st May 2015. But, their marriage couldn’t last long, and finally, he divorced Rebecca in 2016.

As for now, Grete is living happily with her husband and baby daughter. It seems that this couple will last forever this time. We also wish that the couple loves each other till their last breath.

How much is Grete Sadeiko’s Net Worth and Salary?

The salary of her husband is around $1 million. Moreover, the couple is living in a luxury mansion in Leesburg and the estimated value of this mansion is $2.78 million.

Sadeiko also has a tattoo on her left arm. As Robert wrote the name of his wife Grete on his right arm, we just assume that Grete has also written the name of Robert in another language on her arm.

But, that is just our assumption and this might not be true as well.