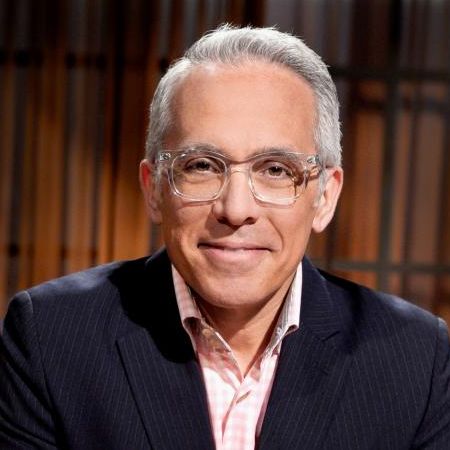 Armenian-American chef, Geoffrey Zakarian is famous for being in the cast of reality TV cook shows such as Chopped, The Next Iron Chef, Iron Chef America, and so on.

What nationality is Geoffrey Zakarian?

Geoffrey Zakarian was born on 25th July 1959, in Worcester, Massachusetts, the United States of America. As of 2022, he is 63 years old and his horoscope is Leo. Every year, Geoffrey celebrates his birthday on the 25th of July. He is the son of Viola Zakarian (mother) and George Zakarian (father). His father was a musician.

He grew up with two siblings, a sister, Cynthia Zakarian, and a brother, George. Geoffrey holds dual nationality Armenian-American while he belongs to mixed ethnical background.

Which college did Geoffrey Zakarian go to?

Geoffrey completed his high school education at Burncoat High School in Worcester, Massachusetts in the year 1977. After that, he attended Worcester State University and received a degree in economics.

He joined the Culinary Institute of America in Hyde Park, New York, and received an associate degree in the year 1982.

What is Geoffrey Zakarian’s Net Worth?

Geoffrey Zakarian has an estimated net worth of $6 million as of 2022 which he earned through his career as a chef, television personality, and author. As per some online resources, an American chef earns an average salary of $15.45 per hour. As Geoffrey is an experienced chef, his salary might be more than the average.

Other than that, he is earning a good amount by advertising, endorsing, and sponsoring, several brands and companies. Being a passionate worker, his net worth and salary will definitely raise higher in the future days. Without any doubt, Geoffrey lives a lavish and fulfilling life with his family members in the United States.

Who is Geoffrey Zakarian’s Wife?

Geoffrey’s wife, Margaret Anne Williams is an American businesswoman and marketing executive from Buffalo, New York State. The couple is married to each other since the year 2005. They dated for some years and finally shared the wedding vows at Our Lady of Lebanon Roman Catholic Church in Niagara Falls, New York.

Geoffrey and Margaret are leading a happy and healthy married life. Prior to Margaret, Geoffrey was married to his first wife, Heather Karaman for almost 10 years. Besides, Geoffrey is free of rumors and controversies at the moment.

Yes, Geoffrey has twin daughters and a son. His daughters are Madeline Zakarian and Anna Zakarian while his son is George Harris Zakarian.

Geoffrey loves his three children a lot. During an interview with some online media, he said:

How much does Geoffrey Zakarian weigh?

Geoffrey stands at a height of 5 feet 11 inches while his body weight is 80kg. He eliminated sugar and refined flour from his diet to maintain his figure. His chest size, waist size, hip size, biceps size, etc are missing from the media. Geoffrey has white-colored hair while his eyes are dark brown in color.

What restaurants does Geoffrey Zakarian own?

Geoffrey owns numerous restaurants in places like New York City, Atlantic City, and Miami. Some of them are Point Royal, CounterPoint, The Lambs Club, The National, and so on.

The Professional Career of Geoffrey Zakarian

How old is Geoffrey Zakaria?

What is the nationality of Geoffrey Zakaria?

Geoffrey Zakaria is American by nationality.

What is the ethnicity of Dan Geoffrey Zakariaenes?