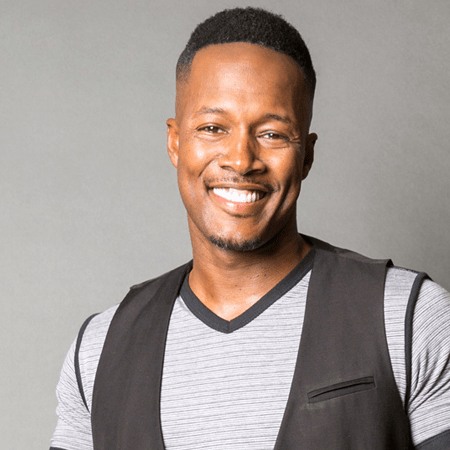 Flex Washington is an American actor, dancer, and comedian. He is famous for his roles as Reggie Coltrane on the ABC series Where I live, Tyberius Walker on Homeboys in Outer Space, and Neville Waston on Total Security.

How old is Flex Washington?

On April 15, 1970, Flex Washington was born in New York City of United States of America. As of now 2022 he is 51 years old. According to his birth date, his sun sign is Aries. He is popularly known as Mark Alexander Knox and Flex Alexander. On every 15th of April, Flex celebrates his birthday. He is the son of Robert Whitehead (father) and Alethia Knox (mother). His mother used to work 3-4 jobs to fulfill all the basic needs of Flex and his siblings.

At least Flex has one older brother and one younger sister. His older brother’s name is Dwayne.  Flex’s grandfather’s name is Robert Whitehead. Robert was a bass guitarist and he passed away in the year 1989. Due to his acrobatic dance skills, Flex earned the nickname Flex. During his early teen, he used to dance in New York nightclubs. Flex holds American citizenship. He belongs to the African-American ethnicity. He follows the Christian religion.

How did Flex Washington’s older brother Dwayne pass away?

Flex’s older brother got himself mixed up with the bad company and he turned into the streets and illegal substances. Later his older brother lost his life from AIDS. Flex would have also left the house and become a street hustler and sleeping on the subways at his 15.

But everything changed in the year 1988 when his friend lost his life in a confrontation with a rival drug dealer. In a similar situation, Flex found himself but he survived when the dealer who had put his gun to Flex’s head jammed.

How much is Flex Washington’s Net Worth?

According to the data of 2022, the estimated net worth of Flex is $250 thousand. Being a well-known American actor, dancer, and comedian Flex earns a very handsome amount of money. According to a different source, an American actor and dancer make an average salary of $59 thousand. Likewise, Washington also earns around $56 thousand as his salary.

All his assets, income, property, and wealth are included in this amount. Flex is living a very luxurious and comfortable life with his family.

Flex is a happily married man. On Valentine’s Day of 2000, Flex tied the knot with his beautiful girlfriend Shanice Wilson. Shanice is an R&B singer and she has released her debut album, Discovery, in 1987 at 14. The clear information about how the couple met is unknown but they might have met each other for the first time during their time in the film industry.

The couple is very loyal to each other and they do not have any external affairs with any other person. The pairs do not have any kind of controversial events till today.

How many children does Flex Washington have?

How Tall is Flex Washington?

Washington is a very handsome man with an amazing personality. He stands at the height of is 6 feet 3 inches tall. Moreover, he weighs about 83 kgs. 51 years old. Flex has black eyes and black-colored hair.