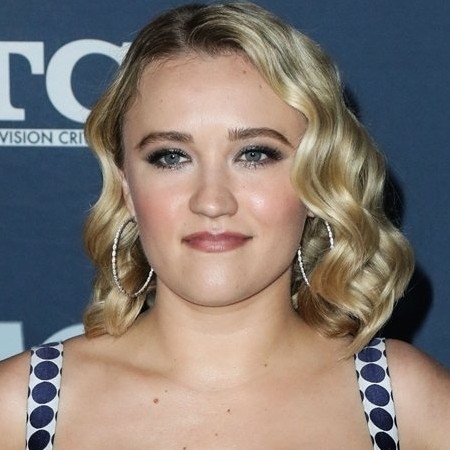 Emily Jordan Osment is an American songwriter, actress, and singer. She is also mostly known as the sister of an American actor Haley Joel Osment.

When was Emily Jordan Osment born?

Emily Jordan Osment opened her eyes to this beautiful world on March 10, 1992. She was born in Los Angeles, California, United States. As of now, she is 29 years old. According to her date of birth, her horoscope is Pisces. Emily celebrates her birthday on March 10 every year. Emily was born to Eugene Osment (father) and Theresa Seifert Osment (mother). By profession, her father is an actor and producer. Likewise, her mother is a teacher.

Emily was raised alongside her brother. His name is Haley Joel Osment and is an actor by profession. Her maternal grandparents’ names are Mary Leora Dinan and Gordon Eugene Seifert. Likewise, her paternal grandparents are Joseph Sloan Osment, Jr, and  Gertrude E. Mulvaney. Emily holds American citizenship and belongs to white ethnic background. Likewise, she follows Roman Catholicism as a religion.

Yes, Emilly and Haley both are related. Emilly is the little sister of, The Sixth Sense star, Haley. Both of them are actors by profession.

Where did Emily Jordan Osment study?

Does Emily Jordan Osment have a husband?

Emily is currently single and unmarried so she does not have a husband. However, she was in a relationship with Jim Gilbert. By profession Emily’s ex-boyfriend, Jim is a therapist. They have not revealed where they first met and their dating history. the duo started dating each other in 2016. The couple has been dating each other for quite a long time. They are seen in public places many times spending their time together.

Likewise, both of them upload many breathtaking pictures to their official social media account. Both of them were very happy with their relationship. However, their happy relationship didn’t last long and they finally broke up. They separated after dating for almost 5 years in 2021.

Emily has been involved with any man in her life. She was first in a relationship with Tony Oller. She started dating Tony in 2009. The duo’s relationship didn’t last long and finally split in 2010. After some time of her breakup, she began dating Nathan Keyes. Emily and Nathan dated each other for just one year. But they still remain good friends with each other.

She then dated an American YouTuber, Jimmy Tatro. The duo didn’t reveal their relationship and like that they ended their relationship. In the year 2008, she dated Mitchel Musso and broke up in 2010. Emily got together with Frankie Allison in 2002 and broke up in 2004. There is not much information as to why they broke up. Likewise also dated  Yvette Gonzalez-Nacer. However, there is a rumor which says she hooked up with Daryl Sabara from 2002 to 2003.

How much is Emily Jordan Osment’s Net Worth?

Emily has an estimated net worth of around $5 million as of 2022. She has earned a decent amount of money from her successful career. Likewise, she has an annual salary of around $3 million. She was able to collect this money from her long-term career as an actress, singer, and songwriter.

Emily is very happy with the money she is earning from her career. Likewise, her brother Haley Joel Osment has an estimated net worth of around $8 Million as of 2022.

According to some sources they are not best friends. But they have been en in some unofficial reunions. According to the statement given on some sites, Miley has said:

“Emily and I tried to be friends, we really did, but it always ended in a fight,” she also wrote “Our characters got along so well, why couldn’t we act the same in real life?”

Does Emily Jordan Osment have a tattoo?

Yes, Jordan has a tattoo on her body. Most of her tattoos are very small. She has an arrow tattoo on her middle finger and, love written on her bicep.

How tall is Emily Jordan Osment?

Emily stands at the height of 5 feet 3 inches. According to o her height, she has a bodyweight of around 54kg. Likewise, her total body weight is  34-24-32 inches. This includes her hip size, chest size, and waist size. Her bra size is 32B with cup size B. Emily has an alluring pair of blue eyes and beautiful long curly blond hair.