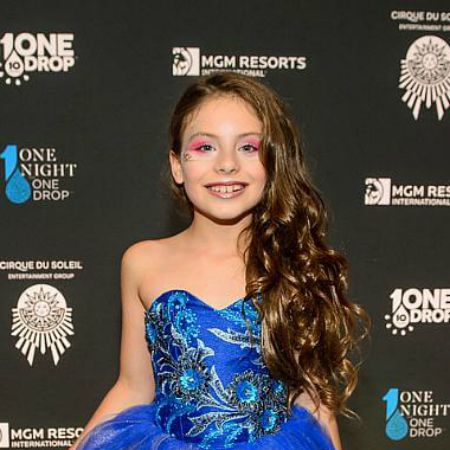 Who is Emanne Beasha? Check out her Biography

The American-Jordanian singer is the winner of the fifth season of Arabs Got Talent. Moreover, she came into the limelight after her appearance on America’s Got Talent Season 14 and receiving the Golden Buzzer.

Emanne Beasha landed on this earth on September 18, 2009, in Amman, Jordan. As of 2019, her age is 11 years old with her birth sign Virgo. She is the daughter of Yanal Beasha who owns an ice cream manufacturing company, Primo Gelato. Her mother’s name is Megan Beasha, American.

Emanne began singing son at the age of two years old. She sang songs like Twinkle, Twinkle, Little Star, and her parents’ recognized her true talent. At the age of 6, she started singing opera. Her grandma said she would become an opera singer from a young age.

She will turn 11 on the day of America’s Got Talent finale. Beasha lives in North Port, Florida with her parents and two brothers.

Beasha introduced America’s Got Talent viewers to her good luck charm on the show. She said she brought her unicorn, Uni, with her to perform because unicorns have magical powers.

In the year 2017, Emanne won Arabs Got Talent in the show’s fifth season at age of 8. Emanne won the cash price of around $50,000. She got the highest number of audience votes for performing the Con Te Partiro song by Andrea Bocelli.

She became the youngest contestant to win the show.

Her Performance in American’s Got Talent

Emanne 2019 auditioned for Season 14 of America’s Got Talent where she sang “Nessun Dorma”. All the judges said Yessesa and advance past the auditions to the Judge Cuts round. She received favorably received and Simon Cowell called it “absolutely fantastic”.

After that, she appeared on the fourth episode of America’s Got Talent’s Judge Cuts with guest judge Jay Leno on August 6, 2019. She performed the opera-style song “Caruso” by the Italian pop singer Lucio Dalla. For her performance, she won the guest judge Jay Leno’s golden buzzer and emotional moment for her.

The golden buzzer qualified her to move on to compete in the quarter-finals live shows. After that, she sang “Ebben? Ne Andro Lontana” (“Well then? I’ll Go Faraway”) from the opera “La Wally” for her appearance in the Quarter Finals of America’s Got Talent on August 27, 2019.

She moved to the semi-finals after America voted. She performed the Italian version of (Everything I Do) I Do It for You by Bryan Adams in the semi-finals. She received favorable reviews from the judges and advanced to the finals in the Judges’ Choice.

After that, she sang “La mamma morta” from Umberto Giordano’s opera Andrea Chenier in the finals. She performed Andrea Bocelli’s “Con te partiro” alongside pianist Lang Lang on the night that the results. Similarly, she was not in the Top 5 acts at the end.

Received Awarded From The King of Jordan

Also, she performed during the independence day celebrations. She sang an opera piece accompanied by an orchestra from the National Music Conservatory at the age of eight years old.

Her Performance on Ellen DeGeneres Show

Emanne came into the limelight after her performance on Little Big Shot’s Executive Producer Ellen DeGeneres. She performed a shared in a Facebook video. She also appeared on the show and recognizes young talent.

Ellen shared Beasha’s video on her Facebook page and viewed it more than 2.5 million times. In the year 2018, she performed O Mio babbino Caro on the show.

“WOW, Can’t believe that the super awesome Ellen DeGeneres shared this on her page…Love You Ellen … Thank you Soooo much for your kind support..”

Who is Emanne Beasha?

The American-Jordanian singer is the winner of the fifth season of Arabs Got Talent. Moreover, she came into the limelight after her appearance on America’s Got Talent Season 14 and receiving the Golden Buzzer.

When was Emanne Beasha born?

Emanne Beasha landed on this earth on September 18, 2009, in Amman, Jordan.

Who is the father of Emanne Beasha?

She is the daughter of Yanal Beasha who owns an ice cream manufacturing company, Primo Gelato. Her mother’s name is Megan Beasha, American.