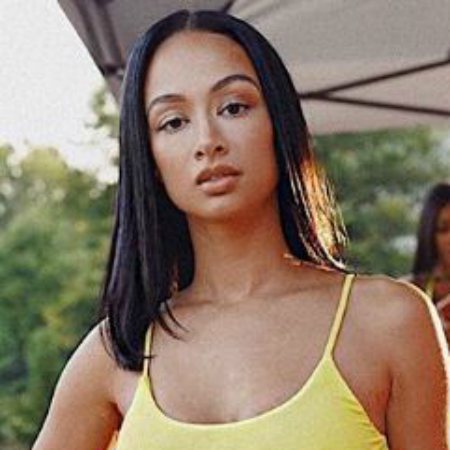 Draya Michele is an American fashion designer, actress as well as a media personality who came to the media spotlight after joining VH1’s, Basketball Wives.

What is the Age of Draya Michele?

Draya Michele entered this world as Andraya Michele Howard on 23rd January 1985, in Reading, Pennsylvania, the United States of America. As of 2019, her age is 34 years old while her birth sign is Aquarius.  Draya celebrates her birthday every year on the 23rd of January.

Her mother’s name is Valeria Diaz. Her mother is of Italian descent while her father is of African American ethnicity. Draya holds an American nationality and belongs to a mixed ethnical background.

Is Draya Michele Married? Who is her Boyfriend?

They started dating in July 2013. After dating for a couple of years, they finally engaged on 21st August 2015. They have been on and off in their relationship but currently, they are living happily enjoying each other’s company.

They have a child together named, Jru Scandrick who was born on 8th April 2016. Draya has another son named Kniko, whom she gave birth to when she was only 17 years old. While there have been rumors that Gilbert is the father of her first son, she once revealed on her Instagram account that his father is a barber from her hometown, Pennsylvania.

Previously, Draya has been in a number of relationships and has been linked to famous stars such as DeShawn Stevenson, Kenyon Martin, Gilbert Arenas, Wiz Khalifa, Bernard Berrian, Ray J, and French Montana at various points in her life.

She was in a relationship with Chris Brown when he beat up and broke up with Rihanna. They dated for nine months before they broke up with Draya saying that he knew a different Chris as he never showed any signs of violence. Also, she stated that Chris never mentioned the Rihanna incident to her despite it being plastered all over the media at the time.

What is Draya Michele’s Net Worth and Salary?

Draya Michele has an estimated net worth of around $600k as of 2022 which she garnered through her career as a fashion designer, actress, and media personality. Draya has also collected an impressive amount of money from some brand endorsement deals, commercial ads, and TV advertisements. As of now, she is quite satisfied with her earnings and she is living her life lavishly with her family members.

Draya Michele stands at the height of 5 feet 7 inches while her body weight is around 62kg. Her body measurement is 36-23-38 inches which include her bust size, waist size, and hip size, respectively. Draya has black hair and dark brown eyes. She has got some tattoos on her body parts like the upper back, forearm, etc.