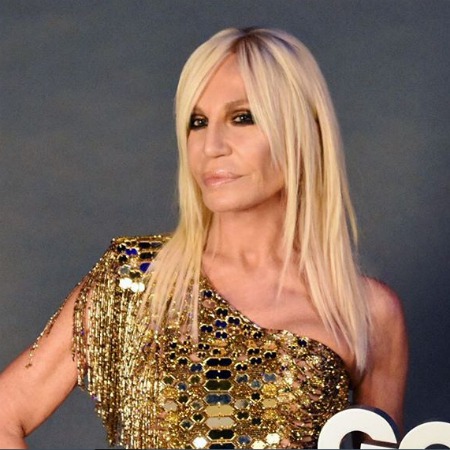 Italian Fashion designer, as well as the current chief creative officer of Versace, a division of Capri Holdings.

Donatella Versace stepped on this world on May 2, 1955, in Reggio Calabria, Italy. As of 2022, her age is 65 years old. She is the daughter of Francesca Versace and Antonio Versace. She has three siblings named Gianni Versace, Tina Versace, and Santo Versace.

Among her three siblings, her brother Gianni was a fashion designer and he was murdered about two decades ago. She is the youngest child of her parents. Donatella holds Italian nationality and belongs to mixed ethnicity.

Who is Donatella Versace’s Husband?

Well, though Donatella is very active in her career, she had many ups and downs in her personal life. Donatella married twice in her lifetime. Initially, she was married to Paul Beck. It was in the year 1987, the couple decided to marry each other.

Paul was an American model. The relationship, in the beginning, was perfect but as it moved further, it turned very bitter and they decide to end their marriage after 10 years of togetherness in the year 1997. From her relationship with Paul, the couple shared two children named Allegra Versace (Daughter) and Daniel Versace (Son).

After her divorce from Paul, she again married Manuel Dallori in the year 2004.

What is Donatella Versace’s Net Worth and Salary?

Well, she is a world-famous designer, and there is no doubt that she has a huge net worth collected from her career. According to the sources, their estimated net worth of Donatella is around $200 million.

Moving forward, with Donatella’s guidance, ‘Versace’ moved beyond clothing and expanded its horizon to accessories and home furnishings. The company even operates two hotels morphing Versace into a complete lifestyle brand. Furthermore, in February 2001, she launched her own fragrance, ‘Versace Woman.

Looking at her contributions and dedication to the fashion world, in 2007, Versace was inducted into the ‘Rodeo Drive Walk of Style. Moreover, pop star Prince presented her with the ‘Fashion Group International Superstar Award.

In 2010, she was nominated for the ‘VH1 Do Something With Style Award’ for providing art supplies to children and creating a tote bag, whose proceeds will go to ‘Starlight’ and the ‘ONE Foundations’.

Did Donatella Versace finish her graduation?

She enrolled at Florence University in Italy to pursue languages. As she was very close to her eldest brother Gianni, he encouraged her to take initiation into fashion design.

How old is Donatella Versace?

What is Donatella Versace’s Height?

Donatella stands at a height of 5 feet 2 inches with a matching body weight.