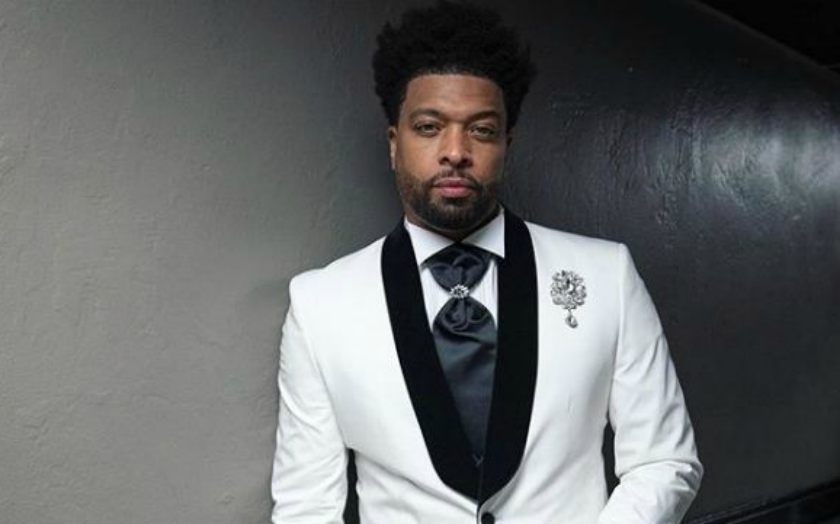 The word ”Three-relationship” has no more been strange in the Hollywood industry. When we talk about such kind of relationship the name Deray Davis immediately strike our mind. It may be the weird matter but Deray is living a blessed life with two girlfriends with no plans of marrying either.

He is not only famous for his comedy shows and music video appearances but also for his relationship status. He is dating two girls at the same time and all of them reside together. Deray is very open up about his polyamorous arrangement and has often shared how he maintains a healthy personal life. How it all started? Who are his two girlfriends? Scroll the screen to find out.

Who is DeRay Davis Wife? How many Girlfriends does he have?

DeRay Davis is an unmarried man but he is dating two beautiful ladies, Caro Peguero, and Coco Crawford at the same time. Though it is not clear, as per some online sources, he is in a relationship with one of them for more than six years and other for around three years. All three of them resides happily together with no plans for marriage or children.

DeRay revealed about his strange relationship during an episode of day-time talk-show The Real in November 2017. He said,

“Living with two women in a polyamorous relationship is perfectly fine, and people shouldn’t be shocked that it works.”

“I’ve been with one for about five years, the other one for almost two and half years now. They’re very comfortable, ’cause I’m very open. I don’t make it where it’s all, ‘Oooh, look what I’m doing.’ I’m not a player.”

“I’d rather they marry each other, and I’ll just be with both of them.”

However, it is not clear whom DeRay met at first. The thing is not so important in their case and they are so adoring for one another. Though it is strange to see such type of relationship, we wish them all the very best for their upcoming future.

Previously, he dated Tracee Ellis Ross. Tracee is an actress who is also best known for being a model, comedian, producer and television host. They were having a romantic love affair for a long time and started dating since the year 2008. However, they broke up later but the reason regarding their breakup is still missing from the media. Besides, there is no information about his married life, wife, and divorce.

How many Children Does DeRay Davis have?

Most of you people might not know that DeRay Davis is already a proud and loving father. He has a child as a daughter named Brook Davis who is in her teens. Davis has an amazing bond with his daughter. However, he has never said a word about who her mother might be and how he raises her with his two girlfriends.

Brook once joined her father on the red carpet and more than that she has a special place in her father’s Instagram posts.

Does DeRay Davis have a Brother?

DeRay Davis has a younger brother named Steph Jones who is R n B singer-songwriter. It is almost unbelievable considering that Steph was born and raised in Houston, Texas while his older brother is a Chicago native. According to some online resources, their father was a drug dealer who was shot when Jones was just 12 years old. Whereas their mother was a disc jockey.

DeRay’s brother, Steph attended college at Santa Monica and majored in psychology. He is famous for his collaboration with rapper Ludacris whom he featured on the single Celebrity Chick and Small World alongside Chingy. He was signed to Def Jam through Ludacris’ Disturbing Tha Peace but Steph later left the label.

Here we present a video of DeRay explaining about Three-relationship: