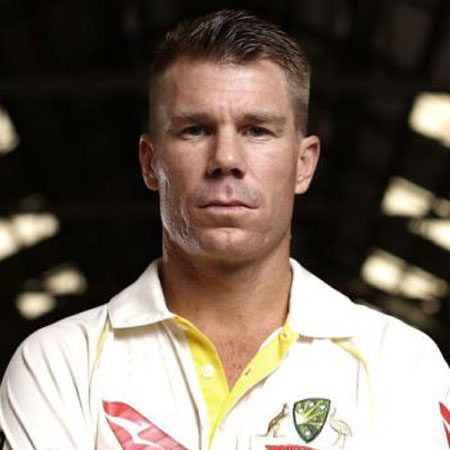 David Warner is an Australian professional Cricketer as well as a former vice-captain of the Australian national team in all 3 formats of the game which are T20, ODI & Test.

David Warner was born as David Andrew Warner on 27th October 1986 in Paddington, New South Wales, Australia. As of 2019, he is 33 years old and his birth sign is Scorpio. His father, Howard Warner worked in a heavy machinery shop while his mother, Lorraine Warner is a nurse. He has an elder brother Stephen Warner.

Also, he obtained higher secondary education at Randwick Boys High School. Warner stands at the height of 5 feet 7 inches and his body weight is around 65 kg.

How much is David Warner’s Net Worth and Salary?

David Warner has an estimated net worth of around $9.9 million as of 2019. Furthermore, his contract for the 2017-2018 season from Cricket Australia was worth $564,174. His annual salary is still missing from the media. Warner boosts his wealth via salary and sponsorships.

He makes money through profitable sponsorship deals with elite companies including Toyota, LG, Gray-Nicolls, and Asics. As of now, David is living a lavish lifestyle with his family. However, the detailed information regarding his houses, car collection and other properties are still missing from the media.

Who is David Warner married to?

David was regarded as Australian Sports Dad of the year in 2016. Warner resides in Sydney, Australia with his beloved wife and two daughters.

Following the incident, the Australian Cricket Team took strict action against him & fined him $7,000 & restricted him to play other matches of the tournament and tour matches.

Also, he gave a clarification that Root was making fun of South African Batsman Hashim Amla which provoked him to do that. In the same way, on 4th March 2018, amidst the tea break time of the 4th day of 1st test between Australia & South Africa, ugly remarks were exchanged between David & Quinton De Kock.

Right after that, ICC sued him by deducting 75% of his match fee by giving 3 demerit points. Recently on 24th March 2018, David was banned to play international cricket for 1 year as he found guilty in case of ball-tampering & he accepted it also in front of the Press.

David Warner began playing cricket at his tender age. Besides, he joined the coastal cricket club in Sydney as a part of under 8 teams. Thereafter, he started playing cricket as a right-handed batsman but later established himself as a left-handed prolific batsman.

David made his international debut on ODI against South Africa at Hobart on 18th January 2009 at the age of 20 and became the first cricketer in 132 years to be selected for the national team without having experience in domestic cricket. Moreover, Warner made his debut on Test against New Zealand at Brisbane on 1st December 2011.

On 11th, January 2011 he appeared in T20 against South Africa at Melbourne. During the international debut year of 2009, he became the 2nd batsman to make most ODI centuries. He scored a maximum number of runs in the ODIs in the year 2016 & became the fastest Australian and 3rd fastest cricketer overall to score 4000 ODI runs in 2017.

Similarly, He has received several honors such as The Bradman Young Cricketer of the year in 2012. In the same way, he received the Allan Border Medal for the best player in Australia in 2016 as well in 2017.

In between the year 2015-2018, he was elected as vice-captain of the national team for Test & ODI formats. Many former cricketers described him as a future legend of cricket.

Is David Active on social Sites?