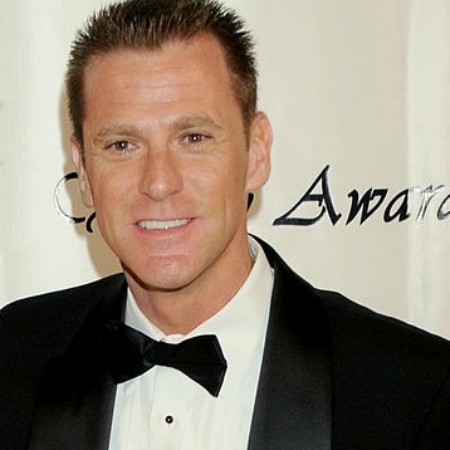 An American personality, David Sanov is a highway patrol officer. Sanov is well known as the husband of actress, Alison Sweeney.

David Sanov was born in about the early ’70s in Los Angeles. David holds an American nationality and belongs to the white ethnic group. As David was raised in California, he attended Oakwood School, located somewhere in North Hollywood. After that, he enrolled at the University of California in Irvine.

Likewise, he earned a college degree in 1994. The celebrity husband, David stands at a height of 6 feet and has maintained a quite good physique. He goes to the gym and exercises to maintain a healthy and fit body. Moreover, David has brown eyes and brown hair which makes him look more handsome.

Still Together, with His Wife Alison Sweeney

Talking about his personal life, we know that this handsome man is married to a beautiful actress, Alison Sweeney. David and Alison knew each other since their childhood. As their parents were friends and worked together, they knew each other quite well.

Alison had a crush on David but did nothing about that. But, coincidentally, the couple ran into each other in 1997 at a party and David asked her out. Since then, the couple started dating each other.

After dating for three years, the couple married on July 8, 2000. Moreover, the couple shares two children together. Their son Benjamin Sanov was born in 2005 and their daughter Megan Sanov joined the family in 2009.

His wife Alison Sweeney is an American actress, reality show host, director, and author born on 19th September 1976. She becomes popular for playing the role of Samantha “Sami” Brady on the NBC soap opera Days of Our Lives, from January 6, 1993, to October 30, 2014.

Sweeney made her screen debut in a commercial for Kodak. Since then she has been active in the entertainment industry. So far, she has featured in over 20 films and TV series over the years. Then she became the host of the reality show “The Biggest Loser” from 2007 until 2015.

Alison Sweeney is a talented film and television actress who is widely known for her appearances in the Chronicle Mysteries series, Murder, She Baked series, The Biggest Loser, Friends, Family Man.

Also, she served as a judge on the hit cooking show Beat Bobby Flay on Food Network. Alison has also won a number of awards for her performances.

How Much Does Police Officer Earn? Net Worth of David Sanov

Being a police officer, David earns enough to live a happy life. The estimated net worth David is around $2,50,000 as of 2022 and his salary is $56 thousand per year. Along with this, his wife Alison has a whopping net worth of around $9 million.

Working for the California Highway Patrol