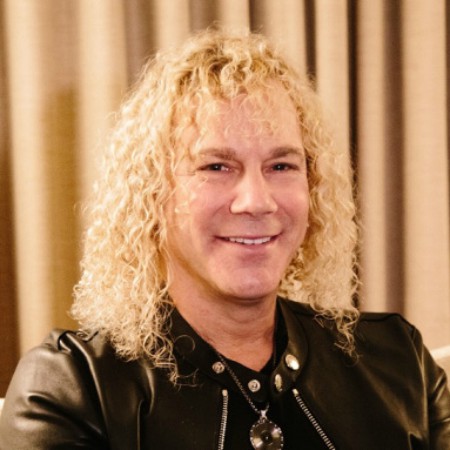 American musician and songwriter, David Bryn is well-known as the keyboard player for the rock band Bon Jovi. Also, he has co-written songs and performed backing vocals.

David Bryan Rashbaum was born on 7th February 1962, as David Bryan to their father Eddie Rashbaum. His birthplace is Perth Amboy but brought up in Edison, New Jersey. His father used to play the trumpet and music was in his genes.

Also, he studied at the Herbert Hoover Middle School, then later at the J. P. Stevens High School, from which he graduated. Later he enrolled at Rutgers University but dropped out in between.

Then he attends Juilliard which was a school devoted to the performing arts in New York City. At the age of 7, he started playing keyboards for a band called ‘Transition’.  His height is 6 feet tall.

“I just got my results back today and tested positive for coronavirus,” Bryan wrote in an Instagram post-Saturday afternoon. “I’ve been sick for a week and feeling better each day. Please don’t be afraid!!! It’s the flu, not the plague. I’ve have been quarantined for a week and will for another week. And when I feel better I’ll get tested again to make sure I’m free of this nasty virus. Please help out with each other. This will be over soon … with the help of every American!!”

He sought testing because he had a fever and a cough. He started to feel sick on March 15 in a New Jersey home.

“The first symptoms were flu-like, with a low level fever around 100 with body aches and headaches,” Bryan tells Variety.

His body aches made it difficult to get out of bed soon after. Then on March 18, it started to move to his lungs.  He accesses to drive-by testing for the coronavirus, which involved a deep swab up his nose after calling his doctor Dr. Mike Rothberg of Brick.

After the test, he was positive and was immediately prescribed antibiotics — Azithromycin and hydroxychloroquine (the “anti-malaria drug”) — which he started on Saturday. According to reports, the medicine is working and he is “getting stronger” while remaining in self-isolation with his wife, Lexil.

“I beg everyone to be extremely careful, follow the basic guidelines by washing your hands frequently, keeping at least a 6 foot distance from others, doing everything you can to stop the virus from spreading and please above all stay home if you can!” he wrote.

Also, his wife Lexi has tested positive but is not displaying any of the same symptoms except for a “slight headache for a couple of days.”

He has been in bed watching movies and getting a lot of sleep as his body fights the virus. Also, he says everyone should do their part to slow the spread and stay home.

“Everybody has just got to stay away from each other to kill this virus,” he says. “As much as it’s not any fun, it’s less fun to have it. If people do the right thing, we can all get over this. People have to take this seriously. You can get it. I got it.”

Keyboard Player for Bon Jovi is a Husband of Two Wives

American musician and songwriter, David Bryn is married twice in his life. He got married to his high school sweetheart April McLean. He with his first wife April exchanged their wedding vows on August 25, 1990. From his first spouse, the couple welcomed three children.

They are two daughters and a son twins Gabrielle (Gabby) Luna Bryan and Colton Moon Bryan born on March 10, 1994. and a son Tiger Lily Bryan born on April 28, 2000. Unfortunately, the couple divorced in the year 2004. After divorcing in April, he started dating Lexi Quaas.

He married his second wife Lexi Quaas on August 7, 2010, in Colts Neck, New Jersey. The couple has eight years of an age difference but still, they make a great couple. From their married life, the couple didn’t have any kids maybe it’s because David married Lexi at a very late age.

The couple resides in their own house at 45 Phalanx Road, Colts Neck in New Jersey living happily with their married life.

What is the Net Worth of American Musician David Bryan?

American musician, David Bryan has an estimated net worth of around $120 Million as of 2022. He has collected his net worth from writing & providing backing vocals for several Bon Jovi hits. Also, he has contributed to the success of the Broadway musical Memphis.

Who is David Bryn?

He is an American musician and songwriter. David Bryn is well-known as the keyboard player for the rock band Bon Jovi. Also, he has co-written songs and performed backing vocals.

When was David Bryan Rashbaum born?

David Bryan Rashbaum was born on 7th February 1962, as David Bryan to his father Eddie Rashbaum. His birthplace is Perth Amboy but brought up in Edison, New Jersey. His father used to play the trumpet and music was in his genes.