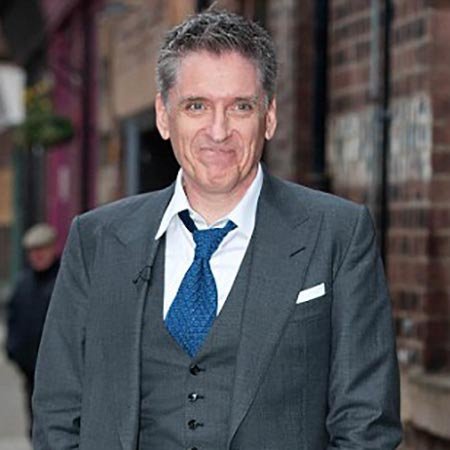 Craig Ferguson is a British-American television host, actor, director, stand-up comedian, writer, producer, and voice artist, who is famous for being the host of the award-winning show The Late Show with Craig Ferguson.

What is the nationality of Craig Ferguson?

Craig Ferguson was born on 17th May 1962 in Springburn, Glasgow, the United Kingdom. As of 2022, he is 60 years old and his horoscope is Taurus. Craig is the son of Robert Ferguson (father) and Janet Ferguson (mother).

He grew up with his two sisters and one brother Lynn Ferguson, Janice Ferguson, and Scott Ferguson. His sister Lynn is also a successful comedian and writer.

He attended Muirfield Primary School and Cumbernauld High School. Later, he dropped out of high school mainly to drink at the age of 16.

What is Craig Ferguson’s Net Worth and Salary ad of 2022?

Craig Ferguson has an estimated net worth of around $30 million as of 2022 and her annual salary is $8.5 million. Needless to say, he earns well from his films and television roles. Nonetheless, his primary source of income is the sale of a novel and a book that Craig has published.

He also earns a decent amount of money from deals, advertisements, endorsements, etc. As of now, Craig lives a lavish lifestyle and drives expensive cars.

Who is Craig Ferguson Wife?

Craig Ferguson is married thrice in his life. He married for the first time Anne Hogarth in the year 1983. And after three years of marriage, they had a divorce in the year 1986.

After that, Craig married for the second time Sascha Corwin in 1998. They share a son named Milo Hamish Ferguson. The couple married in the year 1998 and remained in relation for about six years and separated their ways.

And after his second divorce, he married Megan Wallace Cunningham in the year 2008. Currently, Ferguson lives in Hollywood Hills, the United States along with his wife and there is no information regarding their divorce and separation. Also, they share a son named Liam James Ferguson.

Craig stands at a height of 6 feet 1 inch and his body weight is around 86 kg. Ferguson has grey-black colored hair and his eyes are blue in color.

His career as a Television host and Standup Comedian

Craig’s first television appearance was as Confidence in an episode of the sitcom Red Dwarf in 1989. After discovering that he had a knack for comedy, he hosted The Ferguson Theory in 1993 which blended his stand-up acts with filmed sketches.

Craig moved to Los Angeles, the US in 1994 and got his first role as a baker in the short-lived comedy Maybe This Time, which also starred Betty White and Marie Osmond. He succeeded Craig Kilborn as the host on CBS’s The Late Late Show in the year 2004 and his first show as the regular host was aired in January 2005.

His Appearance on TV series and Movies as Actor and Director

Apart from comedy, Craig also presented his series on Scottish archaeology in 1993, titled Dirt Detective, which focused on historical sites throughout Scotland. Later, he got his breakthrough when he was chosen for the role of Nigel Wick, the evil but lovable boss in The Drew Carey Show. He played the role of Nigel from 1996 to 2003.

Also, he has written and starred in three movies, directing one of them: The Big Tease (1999), Saving Grace (2000) and I’ll Be There (2003). Also, Craig has provided his voice in several animated movies and short films like Legend of the Boneknapper Dragon, How to Train Your Dragon, Gift of the Night Fury, and Big Top Scooby-Doo!.

A Career as a Writer