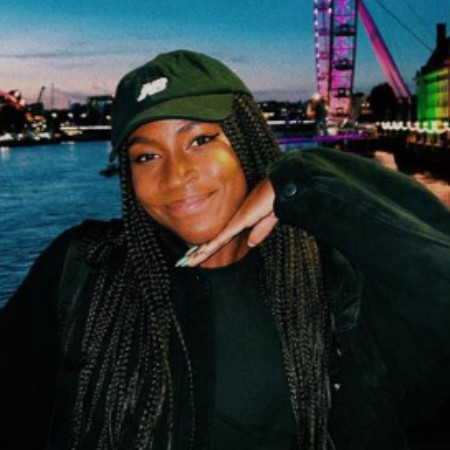 Coco Gauff is an American tennis player who came to the limelight after defeating Venus Williams at Wimbledon at the age of 15.

How old is Coco Gauff?

Coco Gauff opened her eyes to this beautiful world on March 13, 2004. She was born in Atlanta, Georgia, United States of America. As of 2022, she is 18 years old and her zodiac sign is Pisces. By birth, her real name is Cori Gauff. Usually, she celebrates her birthday on the 13th of March every year. Coco’s father’s name is Corey Gauff and her mother’s name is Candi Gauff.

Her father was a college basketball player at Georgia State University and now he has been assigned as her head coach. Similarly, her mother started homeschooling her daughter by utilizing her teaching skills. Likewise, she grew up with her other two brothers. Her brothers’ names are Cameron Gauff and Codey Gauff.

Her grandparents’ names are Yvonne Lee Odom and “Red” Odom. Similarly, she holds American as a nationality while she belongs to mixed (African-American) ethnic background. Moreover, she follows Christianity as a religion.

Where did Coco Gauff go to college?

Coco completed her graduation and received her degree from the Florida Department of Education after finishing her studies at Florida Virtual Flex. Over the past four years, she has balanced her successful professional tennis career and academic pursuits.

Does Coco Gauff have a Boyfriend?

Coco is currently single. Likewise, she is not currently dating anyone. She prefers to keep her personal life private, thus she hasn’t shared much of her information on her dating life. She must be focusing on her career for now.

How much is Coco Gauff’s Net Worth?

Coco Gauff’s net worth is estimated to be $5 million. She earns this million amount from her professional career as an American tennis player.

According to some online resources, the average salary of an American tennis player ranges from $27000 to $52000 per year. So, she might be earning the same amount as her salary.

How much did Coco Gauff win prize money?

Who are Coco Gauff’s Sponsors?

Coco has sponsorship agreements with tennis racquet manufacturer Head, as well as an apparel partnership with New Balance. She also has a relationship with the Italian food company Barilla.

Yes, Coco and Jessica Pegula are close to each other. Jessica is Coco’s double partner while playing tennis. Even so, they won the doubles championship at the National Bank Open.

Who taught Coco Gauff about the tennis games?

Jean-Christophe Faurel and Diego Moyano taught Coco about tennis. Coco’s father Corey Gauff eventually took over as her primary coach. She began her training at the Mouratoglou Academy in France, which is operated by Serena Williams’ longtime coach, Patrick Mouratoglou.

How tall is Coco Gauff?

Coco stands 5 feet 9 inches tall and her body weight is around 64 kg. Likewise, she has a perfect body structure that measures 33-26-34 inches. She wears a bra size of 32 cup B and a shoe size of 7.5 US. Furthermore, she has an alluring pair of black eyes and her hair is also black in color.

What is Coco Gauff’s Injury?

Coco had an ankle injury at the Cincinnati Open. Her ankle injury made her worried that she might miss the upcoming US open. She was forced to quit her first-round match against Czech Republic’s Marie Bouzkova, leaving the court in tears and her participation in New York in serious doubt. Though in her social media post, she wrote,

“I have been told it is most likely a really minor sprain so everything should be healed very soon.”

Yes, Coco had dental surgery. She took her phone while under anesthesia and posted one of the philosophical questions that she asked herself saying

“What makes the sky blue?”

Which ethnic background does Coco Gauff belong to?

What is Coco Gauff’s Injury?

Coco suffered from an ankle injury at the Cincinnati Open.

How much is Coco Gauff’s net worth?

Coco Gauff’s net worth is estimated to be $5 million.

Yes, Coco and Jessica Pegula are close to each other. Jessica is Coco’s double partner while playing tennis. Even so, they won the doubles championship at the National Bank Open.